German terrorism trial gets off to halting start

Four alleged Islamist terrorists have gone on trial in the German city of Düsseldorf. Proceedings were delayed after defense lawyers challenged the court's impartiality. 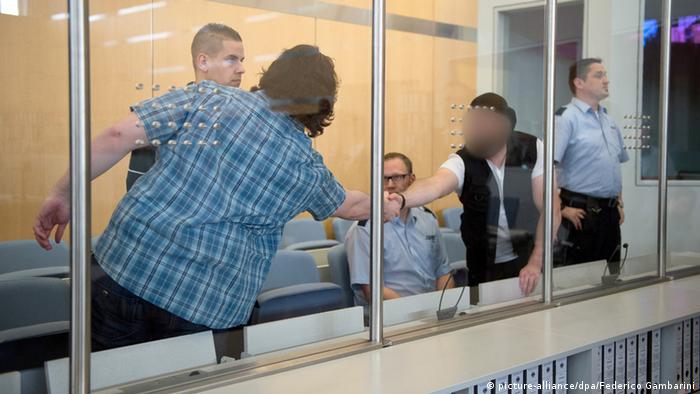 Four alleged terrorists from the Islamist Salafi movement went on trial under high security in the western German city of Düsseldorf on Monday, accused of attempted violent crimes.

The accused have been charged with the attempted murder of the chairman of the right-wing extremist party "Pro NRW" in March, 2013.

According to federal prosecutor Horst Salzmann, the four men wanted to take "violent revenge" for caricatures criticizing Islam issued by the party during its regional election campaign in 2012. The caricatures included some depicting the Prophet Mohammed - something Islam forbids.

In addition to charges of attempted murder and conspiracy to commit murder, the defendants, aged from 24 to 44, also stand accused of founding a terrorist group and of violating German weapons laws.

One of the four men, 27-year-old Marco G., is additionally accused of having tried to carry out a bomb attack at Bonn's main railway station on December 10, 2012.

Marco G., a German Muslim convert from the northern city of Oldenburg, had intended to kill or severely injure as many people on the railway platform as possible "maliciously and from base motives," Salzmann said in his opening speech for the prosecution.

Only a construction defect had prevented the bomb from exploding and causing a bloodbath, Salzmann claimed.

Chemicals for building bombs were later found in the accused's apartment.

Marco G., who has refused to testify, was arrested along with the three other defendants shortly before the planned murder of the "Pro NRW" chairman was allegedly to take place. The four had gathered only a few hundred meters (yards) from the home of the right-wing politician, Markus Beisicht, in the town of Leverkusen when they were seized.

The beginning of the trial was postponed after the defense challenged the impartiality of the court. The court deferred ruling on the challenge.

If convicted, Marco G. faces life imprisonment. The other three could receive prison sentences of up to 15 years. The trial is scheduled to run until April 2015.