Helicopters make a lot of noise - and their rotors and engines are to blame for it. Researchers in Berlin want to change that and cut the noise levels caused both by air turbulence and the machinery. 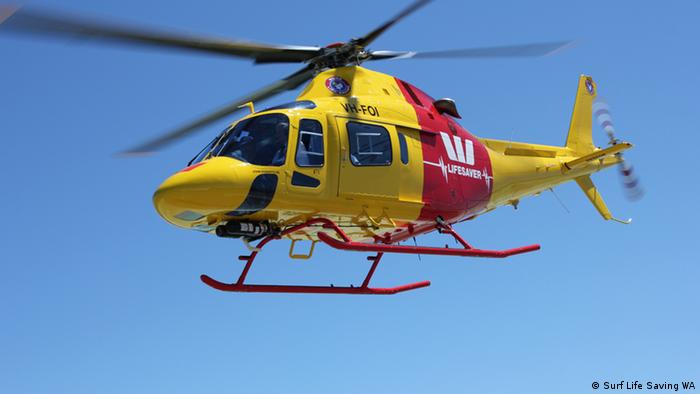 Helicopters aren't just used in the military - they are often used by rescue services because they go reach places where other modes of transportation can't go - like remote mountains with hikers or skiers who may be lost or injured. And they can also be used to transport injured people after a pile-up on the highway. Rescue services use helicopters just as much as the police, which often uses them to monitor large events.

But despite being so useful, helicopters have a major flaw - they are very loud. And that's not just annoying for the passengers on board but also for people on the ground. One source of the noise comes from the air turbulence produced by the rotating blades. Considerable strides have been made with rotors that produce much less noise, but loud helicopter engines are still a problem.

Several sources of noise in the engine

Researchers from the German Aviation and Aerospace Center (DLR) are working on reducing the noise made by helicopters in a project supported by the European Union. There are many sources of noise in the engine.

"Special sounds are made by compressors and turbines rotating rapidly," says DLR engineer, Karsten Knobloch. Another source of noise in the engine is the combustion chamber. "Through the release of heat, combustion noise is also produced," the engineer explains. 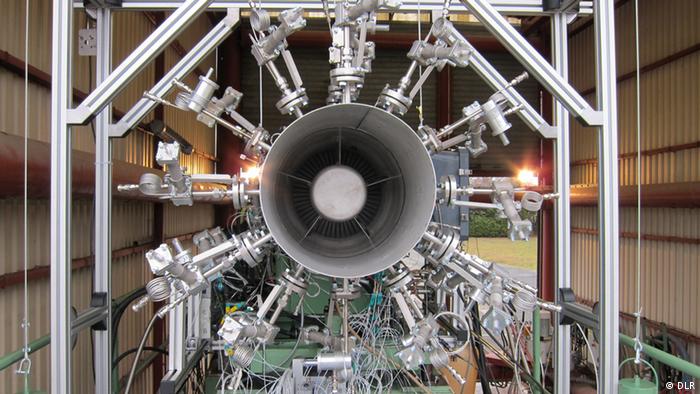 Using a specially developed microphone, the DLR hopes to record sounds from a helicopter engine

Temperatures in an engine can reach 1,200 degrees Celsius and the pressure can be as much as 12 times normal atmospheric pressure. Even a good microphone will either stop working or melt in such extreme conditions. Also, any microphone would have to be able to record the large bandwidth of noise in the engine, according to Knobloch. It is just as important to record the quieter sounds as it is the very loud ones in this inferno, he notes. "[And] the microphone sensors must also withstand big changes in pressure," the DLR engineer explains.

Since regular microphones are not capable of working in extreme conditions, the sound experts from the DLR have developed special devices - hot gas microphones with which the noise of the engines can be differentiated. The essential part of a hot gas microphone is a long, silver metal pipe, which ends in a pressure-tight rectangular metal block. The pressure is balanced by a spiral at the microphone.

"You can think of this gas microphone much like a stethoscope at the doctor's," says Professor Lars Enghardt from the DLR.

"The position at which you hear something is on the patient's chest. That's what the doctor hears. But the area where the sound is discerned is in the ear. That means that we are taking the sound from the inside of the engine to an "artistic ear." That's our microphone."

The advantage of this measuring method is obvious. Tthe place where the artistic ear - the microphone - sits is not as hot as the engine inside. In addition, there are no aggressive combustion residues, which could additionally damage the sensitive equipment. In addition, the extremely high pressure of the engine is avoided.

The researchers have already measured a helicopter engine with the microphone they developed. The sound from the combustion chamber, compressors, turbines and exhaust have been recorded precisely and the individual frequencies were filtered out and measured. What is especially exciting is that the different sources of noise are clear in the engine. The exhaust carries hot gases to the outside, causing a dull, harsh noise.

But, in the combustion chamber, there are also other forces at work: in it, the compressed air is ignited with the fuel and burned. The explosive noise that is created as a result makes a more 'screechy' sound. Outside the engine, the sound sources mix and become a mush of noise. The fact that researchers, for the first time, have now recorded and differentiated these noises and their sources is a major coup.

Noise dumper in the engine

The results have a large practical significance for building new engines.

"We will be able to decide with this complex analysis, which parts of the engine are worth working on technically for the sound," explains Lars Enghardt from DLR.

A silencer, for instance, could ensure that the frequency components of the turbine can be captured by a resonant body and converted into heat, reducing the amount of noise detectable on the outside.

That could be the first step toward a quieter helicoper. In a subsequent project, the researchers will look at appropriate noise protection measures. Helicopters, which are useful in everyday life, could be quieter in a few years, sparing the nerves of passengers and people on the ground.

Noise isn't just irritating, it can also be costly. It can lead to mistakes in production because it can affect how machines work. That's why researchers are finding ways to reduce noise at its origin. (11.04.2013)

Making music with a DIY synthesizer

A growing movement of musicians and engineers are building their own synthesizers. And most of them are buying their circuit boards and components on the Net. DW looks at DIY synths. (04.04.2013)