Fartuun Adan has spent decades campaigning for the rights of traumatized women in war-torn Somalia. Germany's Friedrich Ebert Foundation is awarding her its Human Rights Prize. There is a tremble in the woman's voice as she explains how her life changed three years ago. It was the day her nine year old daughter was raped. Fartuun Adan sits opposite the woman, listening attentively. The woman is close to tears.

Adan is the executive director of the Elman Peace and Human Rights Center in the Somali capital Mogadishu. It is one of the few places in the failed state where women can talk openly about their suffering.

"She took me by the hand and consoled me like a mother. Since then we are like a family," said the woman. Adan gives her a hug and they both weep. 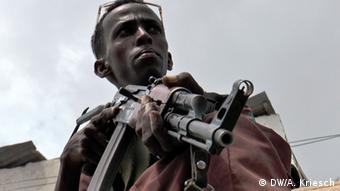 Adan founded a women's rights group with her husband Elman Ali Ahmed in 1991, the year Somali dictator Siad Barre was toppled. The country was tipped into a brutal civil war, which continues to this day.

Her husband was killed at the height of the civil war in 1996 and she fled to Canada with her daughters. But she returned to Somalia to help fight for the rights of aggrieved Somali women in 2007, even though the conflict was still raging.

In Muslim-dominated Somali society, sexual violence against woman is a taboo subject; it is not talked about. "For years, Somali men would just deny that it took place at all," said Adan.

She and her team are now raising awareness of this disturbing social problem and have opened centers where women can seek help. Psychologists are available for counseling; the women can also attend workshops which assist in the search for employment. In a backyard, a group are learning how to dye clothes. Another group is practicing body painting for marriage ceremonies.

"It is important to give the women more control over their lives," said Adan. "They realize they can go out and earn money themselves and do not need to be dependent on a husband. This new-found self-confidence transforms their lives," she explained. 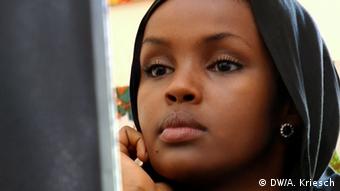 Adan's daughter Ilwad Elman stands next to her mother, nodding in agreement. After completing her studies, she too returned to Somalia, swapping a comfortable life in Canada for the ever-present dangers of Mogadishu and exchanging the freedom to wear her hair as she pleased for a headscarf. In Mogadishu, she has to weigh up very carefully when it is safe to leave the house and which streets she should use. The Islamist militant group al-Shabab regularly murders its opponents and they include human rights activists.

The daughter speaks of her admiration for her mother. "I am 24 years old right now. By the age I am today, my mother already had my sisters and me. She had already gone through living in a refugee camp. She had already lost her husband. She had to move to different countries, learn a new language, and work so she could provide for us," Ilwad Elman said. The Elman Center encourages women to look for opportuinities for employment

The mother is undisputedly a role model: "She is just one of the most understanding and patient women I have ever met."

Patience is a useful, if not essential, character trait in war-torn Somalia. The officials in the transitional government whom Adan has to consult are constantly changing. They are replaced either because of power struggles, or conflicts between the various clans, or because they have been killed by terrorists.

With its Human Rights Prize, Germany's Friedrich Ebert Foundation is honoring Fartuun Adan for "long and persistent engagement for women's rights in a society exposed to decades of civil war."

In spite of the daily stories of suffering she encounters, she refuses to give up hope: