German prisoners find their inner Zen | Germany | News and in-depth reporting from Berlin and beyond | DW | 30.04.2013

Feelings of guilt and hopelessness can put extreme pressure on prisoners. In one German prison, inmates are discovering a new sense of calm with regular meditation that also prepares them for life on the outside. 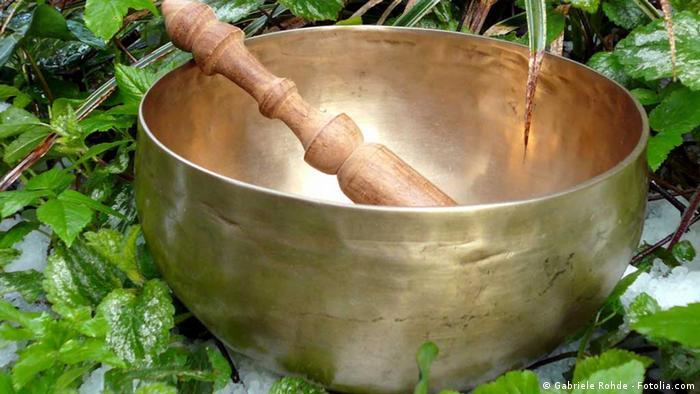 André S. recently celebrated his 32nd birthday behind bars. A father of two, he is allowed to see his family twice a month, each visit restricted to a single hour.

On weekdays, he and the other inmates at the prison in Siegburg, a small town in western Germany, are allowed outside for 60 minutes. They roam the courtyard in small groups, talking loudly, some smoking, others just content to stretch their limbs. 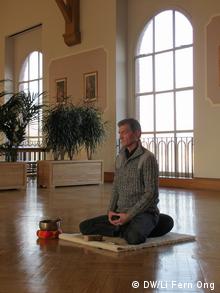 The key to his inner freedom is a simple wooden stool and small red mat in his cell, which he uses for meditation sessions.

Eight years ago, Catholic deacon Bruno Liesenfeld began ministering to the spiritual needs of the Siegburg inmates. Having practiced meditation for over a decade himself, he noticed that many inmates had sleeping difficulties and were troubled by disturbing thought patterns.

His Zen meditation program was initially open to all inmates. Gradually, mats and cushions were acquired, and the prison's wood workshop contributed 10 small stools. The sessions soon caught the attention of the prison staff as well.

These days, not only are there separate sessions for staff and twice weekly evening sessions for inmates, but every few months a five-hour workshop takes place on a Saturday. Prisoners, staff and outside visitors from the nearby towns of Cologne and Bonn sit side-by-side and meditate in a solidarity founded on silence.

André admitted that he fell asleep during his first meditation session. "We are advised not to close our eyes, because we don't want to start sleeping or dreaming. I said, okay, let me just close my eyes for a few minutes. I was completely gone," he remembered.

Another time, he burst out laughing during the silence, causing everyone else to laugh, too. It would seem humor is just as important as spirituality in healing.

One of the biggest challenges of life on the inside is the noise. Markus M., a 31-year-old inmate in the Siegburg facility, finds it particularly hard to maintain his sense of self in the face of slamming doors, footsteps in the halls, and shrill orders over the loudspeaker. The clamor and commotion of 388 men in close confines can become overpowering at times.

Apart from what their ears take in, it's the inner "noise" that is even harder to deal with. "When you come to jail, a lot of voices start talking, saying for example, 'See where you are, you are inside jail, see what's going on now.' These voices can push you down and make you depressed. You have to find a way to deal with that," explained André.

"The need for stillness is huge," added Liesenfeld. André likened the journey within to battling a storm. "When you start dealing with your problems, you enter into a storm. You have to try and imagine you are in a tree, and what you want to avoid is climbing to the very top of that tree because the wind there will just blow you away. So you have to go down to the roots of the tree where it is very stable and very strong." 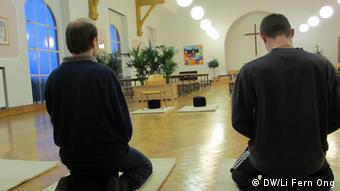 Prisoners meditate twice a week together in silence

He focuses on his breathing, the very simple act of air entering and exiting the body. After several minutes, "you don't even think about the stress or the problems. And then if they arise again in your head, your breathing practice will act as a buffer so the problems don't overwhelm you anymore."

Dr James Austin, a neurophysiologist at the University of Colorado and author of "Zen and the Brain," has discovered many positive physiological changes in people who regularly meditate. They experience an increase in alpha brain wave frequency, and have a slower, more stable heart rate and breathing pattern. That leads to a feeling of tranquility and calm.

Other researchers have found correlations between meditation and self-control, self-esteem and cognitive function. The advantages associated with meditation have led prisons in Cologne and Brandenburg to implement similar programs.

Markus and André experience so much benefit from their meditation sessions that they practice on their own in their cells as well. Markus is interested in continuing with meditation after he is released from prison. Now he has the tools to avoid falling into the stress traps many people face. 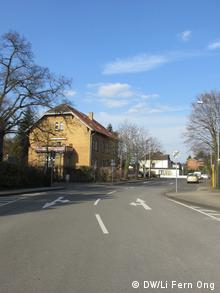 One road enters and exits the Siegburg prison

"When you are outside, you have a lot of appointments. You use your mobile phone round the clock and you have to be available," pointed out André. "But guess what? You don't even have time for yourself."

Most male inmates in German prisons are not first-time offenders and have five to 10 convictions on record. Not everyone makes the long walk to freedom and stays there. Many feel safer in prison because of traumatic past experiences with the outside world.

Almost two decades of work with troubled youth and prisoners has led Bruno Liesenfeld to conclude that "most criminals were, at some point in their lives, victims themselves: victims of abuse and of violence; victims of neglect, and of limited opportunities for intellectual and social development."

André has been interned twice and has a family waiting for him on the outside. His experience has convinced him that "it doesn't matter what situation you are in. The first thing you should do is not to lose hope. We are living in a world where it is very difficult to find peace. There is peace if you are looking for it, even in prison."

Listen to the radio report on prison meditation

A new prison in Berlin has triggered a debate in Germany on the country's penal system. Media describe the new jail as 'five-star slammer.' But what kind of standards and conditions are there in German prisons? (21.03.2013)

Prison violence in Germany a part of life

Injury, abuse, sexual violence, threats and even murder are common in German prisons, according to a recent survey of inmates. Improving the living conditions is difficult. (10.11.2012)

Buddhism lessons teach German pupils the art of 'not thinking'

Buddhism has been part of religious instruction in Germany since 2003, but only in public schools in Berlin. Now, private schools in other German states have also begun putting Buddhism on their lesson plans. (02.08.2011)

Meditation can improve your health