German Power Demand Puts Out Light Across Europe | Europe| News and current affairs from around the continent | DW | 05.11.2006

Parts of Europe were hit by electricity cuts late Saturday with a chain-reaction effect blamed on a surge in German demand causing power losses as far south as Spain. 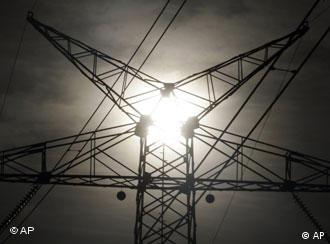 Officials are still looking into the exact cause of the blackout

A surge in electricity demand in Germany due to cold weather triggered blackouts across western Europe Saturday night, leaving about 10 percent of French consumers without power, electricity operators said.

"We weren't very far from a European blackout," Pierre Bornard, a member of the board of directors of the French power company RTE, told the AFP news agency.

The German energy company RWE said the trouble was due to a surge in demand late Saturday when temperatures plummeted to the freezing point.

"Not enough power was being generated in the network," a RWE spokesman said, adding that the outage became a pan-European incident because the supply was on a shared network.

The spokesman also said a failure outside the company's network was responsible for the outage.

"Initial findings indicate that the disturbance was due to excessive strain on the grid in northwestern Germany," E.ON, Germany's biggest power supplier, said in a statement.

An insufficient power supply first triggered blackouts in parts of southern and western Germany, particularly in Cologne, and then spread to France as the French electricity company EDF tried to meet surging consumer needs, leading to what what Bornard called a "house of cards" style breakdown. Parts of Italy and Spain also experienced power outages.

In order to avoid a complete blackout, "automatic security systems sharply cut" supplies to some customers, he said, noting: "It all happened in several seconds."

The loss in power, which occurred around 10 p.m. Central European Time, prompted a ripple effect in Spanish power stations as facilities automatically shut down to protect them from power surges. Also affected was the connection between Spain and Morocco, a spokesperson for Spanish power concern Red Electrica said Sunday.

The cross-border power wobble was also felt in Belgium, where trains halted Saturday between 10 p.m. and 11 p.m.

"Luckily the power didn't fail at 5 p.m. on a Friday evening," a spokesperson for railway operator SNCB said.

The outages resulted in thousands of panicked calls to police and fire departments, but there did not appear to be any serious damages caused by the lack of power.

A New Energy Wave for Europe in Portugal

The Portuguese coast has become Europe's latest source of renewable energy. Experts say over 300 gigawatts of electricity could be tapped from European waters in the future. (15.10.2006)

Europe is baking under a relentless sun with temperatures well above 30 degrees Celsius (90 degrees F), though forecasters were promising temporary relief in the next few days. (27.07.2006)