No more dancing children or kitschy pets: German porcelain maker Goebel has announced that it will stop making its Hummel figures by the end of the year. 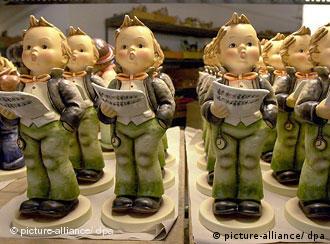 The figures were based on drawings by a German nun

The producers in the Franconian town of Roedental said on Wednesday, June 18, that they were stopping production of the Hummel figurines due to a steep decline in sales.

According to Goebel's managing director Axel Hosek, demand has collapsed in recent months, despite the company's efforts to market the figurines.

"The trend that has prevailed in the last few years has unfortunately continued," he said in a statement. 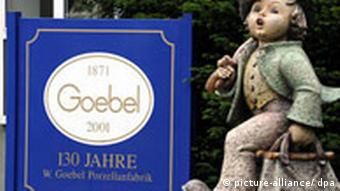 The firm will continue producing gifts and household items

Goebel was founded in 1871, but the Hummel figures, which sky-rocketed the company’s international success, were not created until 1934. The cherubic children and playful animals were inspired by the drawings of a Bavarian nun, Maria Innocentia Hummel, whose birth name was Berta.

Company head Franz Goebel’s decision to produce Hummel’s drawings as porcelain figures was an immediate success. Demand was so great, especially in the United States, that the company could hardly keep up with the orders. During the American occupation of Bavaria following World War II, Hummel figures became a popular souvenir for soldiers -- and a symbol of another, more peaceful Germany.

At their peak, more than 1,600 workers were involved in making the porcelain figurines in Roedental. In the 1970s, Goebel opened a Hummel production plant in the United States, as well as distribution centers in France, Great Britain and Hong Kong.

But the interest for the more than 1,000 different hand-crafted, hand-painted Hummel figures has declined since the turn of the century and led to heavy losses for Goebel. When the company declared bankruptcy two years ago, investors jumped in to try to save the figurines.

Goebel management has said it would now turn toward gifts and household items to boost turnover. The Hummel shutdown will affect 230 of the manufacturer's 340 employees.

For the more than 30,000 visitors that tour the Goebel plant each year, the figurines will still be on display at the Berta-Hummel Museum in Massing.

Germany's historic porcelain manufacturers are threatened with extinction unless they capitalize on the qualities of craftsmanship that will also place them squarely in the category of luxury labels only. (21.06.2004)

Saxony's most famous king, August the Strong (1670-1733), has long been acknowledged as a supporter of the arts. But the eastern German ruler also had an eye for raunchy drawings, as an exhibition in Dresden shows. (28.02.2005)