German Pope Promises Dialogue With Jews | Europe | News and current affairs from around the continent | DW | 22.04.2005

As Pope Benedict XVI continued to settle into his role as the new leader of the Catholic Church, he vowed to promote dialogue with Jews as part of an emphasis on interfaith issues. 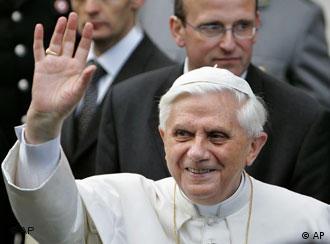 Rome's chief rabbi said late Thursday that the pope had sent a telegram saying he was putting his "trust in the Almighty" to foster a dialogue with Jewish leaders nurtured by the late John Paul II.

The last pope, who died on April 2, won widespread admiration in Israel not only for being the first pontiff to visit a synagogue but also for his work in reconciling the Roman Catholic Church with the Jewish people. 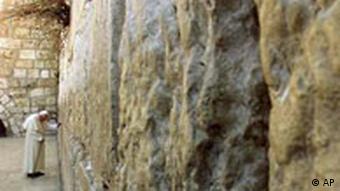 The late Pope John Paul II prayed at the Western Wall in the Old City of Jerusalem in March, 2000. He won respect in Israel for his efforts to reconcile the Catholic Church with the Jewish people.

Benedict XVI's message to Chief Rabbi Riccardo Di Segni read: "I trust in the help of the Almighty to continue and to strengthen the dialogue and collaboration with the sons and daughters of the Jewish people."

Pope Benedict XVI's election was also welcomed in the Muslim world, where John Paul II made a big impact by being the first pope to visit a mosque.

In one of his first key decisions as pontiff, Benedict XVI confirmed Cardinal Angelo Sodano as Vatican secretary of state, his number two. 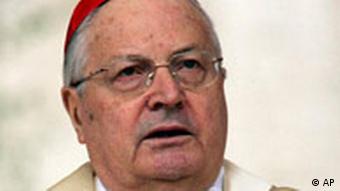 Among other key re-appointments were Leonardo Sandri as Sodano's deputy and Giovanni Lajolo as the Vatican's foreign minister.

It means Benedict XVI was beginning his papacy with the same administration he inherited from John Paul II, with one notable exception -- his former post as head of the Vatican's top doctrinal authority was still vacant.

As the pope prepared for an inauguration mass Sunday likely to draw up to half a million people and several world leaders, cardinals gave insights into the man they picked Tuesday as spiritual leader of the Roman Catholic Church.

Many spoke of his personal and theological qualities, trying to soften his image as an authoritarian enforcer of conservative doctrine.

"We all felt he was our brother with superior qualities," Austrian Cardinal Christoph Schönborn said in an interview.

"He is human and he'll convince you," Italy's Tarciso Bertone said. "He is both a man of science and of faith. He possesses a great sense of humanity, he loves nature and music and he is a great pianist."

Other prelates predicted he would share more power with local bishops, one of the key demands within the Church, as well as focus on Asia and Africa and be more receptive to new ideas.

The pope, then simply Cardinal Joseph Ratzinger, went into Monday's secret conclave at the head of a conservative faction against a minority bloc of more liberal prelates.

His support was evident in Monday's evening's first ballot, and by Tuesday lunchtime the outcome was clear, Vatican watchers said.

He was elected on the fourth vote later that day, possibly winning as many as 107 votes from the 115 cardinals sequestered in the Sistine Chapel.

In this photo released by the Vatican paper L'Osservatore Romano, Austrian Cardinal Christoph Schönborn takes an oath at the beginning of the conclave to elect the next pope in the Sistine Chapel at the Vatican, Monday, April 18, 2005.

"I will say nothing about the conclave," Schönborn told La Repubblica, "but yes, there was great unanimity."

"His was a strong presence," the Vienna archbishop recalled, saying Ratzinger had impressed prelates with his handling of events after John Paul II's death.

Rome's mayor Walter Veltroni said he expected up to 500,000 people to attend the inauguration mass at 10 a.m. on Sunday.

"That's like dinner at home -- anything under three million is a breeze," he was quoted as saying by Italy's ANSA news agency.

Among those expected are German Chancellor Gerhard Schröder, a clutch of other presidents and prime ministers and a smattering of royalty.

As Pope Benedict XVI pledged to continue working toward unity across religions, observers in Germany hope having a countryman on the papal throne will help the country take another step beyond its Nazi past. (April 20, 2005)

Germany's top-selling newspaper Bild was furious on Thursday at the coverage of the new pope by British newspapers, which had accentuated Benedict XVI's past as a teenager in Nazi Germany. (April 21, 2005)

Pope Benedict XVI says he's open to dialogue both within his own Church and with other faiths during his first public Mass Wednesday, signaling a commitment to continue the reconciliatory stance of his predecessors. (April 21, 2005)