German Police Apologize for Tearing Down Israeli Flag | Germany | News and in-depth reporting from Berlin and beyond | DW | 14.01.2009

A police chief in Duisburg issued a formal apology after his officers tore down two Israeli flags during a recent street protest against Israel's bombing raids in Gaza. 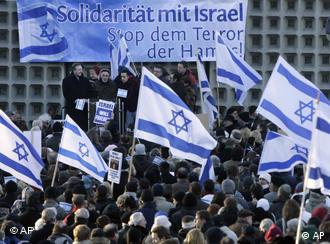 There have been protests against Israel, but also for it (shown here), across Europe

Late Tuesday, Rolf Cebin, head of the police department in Duisburg, in western Germany, said, "the removal of the flags was -- in hindsight -- the wrong decision."

Officers entered the unoccupied apartment to remove the flags after demonstrators began pelting them with various things -- some said snowballs were thrown, while others said the demonstrators were throwing rocks.

The police said they were acting to defuse a situation that threatened to turn violent as over 10,000 people marched through the city in protest at Israel's actions in Gaza.

"Given what I know today, I would have solved the problem in a different way, in order to avoid an escalation," Cebin added.

The ripping-down of the flags sparked furious reaction from Jewish groups. A representative from the Simon-Wiesenthal-Center described the action as "cowardly" and "incomprehensible."

'Would they have torn down a Hamas flag?'

"Can anyone imagine police storming into a privately-owned house to remove a Hamas flag?" the Central Council of Jews in Germany asked?

In a separate incident in Berlin, a 35-year-old man who identified himself as Palestinian attacked a guard outside a synagogue in Berlin with an iron bar.

The man wanted to register a protest against Israel's war in Gaza, a police statement said.

Cities around the world were braced Sunday for fresh rallies both in support of and in opposition to Israel's attacks on the Gaza Strip as the bombing campaign entered its third week. (11.01.2009)

Renewed rioting took place in the Greek capital Athens overnight while German police arrested 10 people during scuffles with demonstrators staging a rally in Hamburg in support of protests in Greece. (21.12.2008)