German parliament gives limited backing to genetic testing of embryos | Germany| News and in-depth reporting from Berlin and beyond | DW | 07.07.2011

The Bundestag faced a complex matter of conscience Thursday as it voted in favor of allowing the pre-implantation genetic diagnosis of embryos. It's a controversial topic, and many Germans oppose the matter on principle. 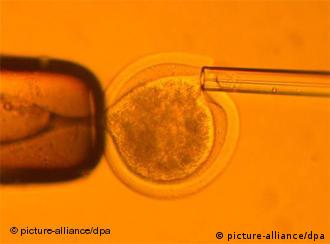 Many Germans are wary of any policies that resemble eugenics

PGD involves extracting cells from a developing embryo to test for genetic disorders. The practice has garnered significant opposition around the world on religious and ethical grounds amid fears it could be used to let parents choose "designer babies."

Over 320 Bundestag members said Thursday that PGD should be allowed only when couples carried a genetic predisposition to a high probability of serious disease which could be passed down to their children, leading to death or miscarriage. Eight members abstained from the vote, while 260 voted against the bill.

It's believed the majority of members from the opposition Social Democrats and the Left Party, as well as the minority partner in the coalition government, the Free Democrats, voted in favor of PGD. Most parliamentarians from Chancellor Angela Merkel's Christian Democrats voted against the winning bill, as did many members of the Greens.

Christian groups spoke out against the decision, with the Catholic German Bishops Council declaring that the selection of human embryos went against the "respect for human dignity, which every person has a right to from conception."

The head of the Protestant Council in Germany, Nikolaus Schneider, echoed this skepticism. He said the law approved by the Bundestag went too far, and that he would only support PGD in cases where there was a strong likelihood of death or miscarriage.

The German Embryo Protection Act of 1990 does not expressly regulate genetic testing on embryos prior to implantation - and therefore it was long considered a criminal offense. This only changed when the Federal Court of Justice last year allowed a review of artificially fertilized embryos in couples with a predisposition to severe genetic disorders. 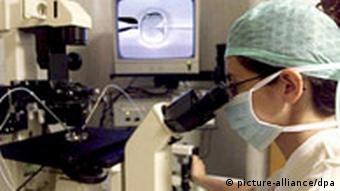 Advanced maternal age puts a pregnancy at a higher risk

The first proposal, which had the support of some 192 parliamentarians, argued for a strict ban on PGD. This draft took the position that the possible rejection of diseased embryos would endanger "societal acceptance of diversity" by increasing pressure on couples to have a healthy child. Chancellor Angela Merkel was also considered a supporter of this plan.

The second proposal, which ultimately won Bundestag backing, called for PGD only in cases where couples carried the predisposition to a serious genetic disease themselves or where a pregnancy would likely result in stillbirth or miscarriage. To avoid abuse, parents would be required to submit to mandatory counseling.

Furthermore, an ethics committee would be required to submit a positive vote. The plan called for PGD to be made available only at a few licensed centers.

A third plan foresaw a general ban on PGD, with a small number of exceptional cases to be defined as "not unlawful." Bundestag President Norbert Lammert had shown his support for this position, which maintained that PGD should only be possible when serious hereditary predisposition of the parents was "very likely" to damage the embryo, and would in turn "lead with high probability to death or miscarriage." This plan also called for mandatory counseling and the consent of an ethics commission.

The controversial practice of screening artificially inseminated embryos for genetic diseases before they implanted should be permitted, according a panel of 13 scientists. (19.01.2011)

Genetic screening of test-tube embryos has been the subject of hot debate for months in Germany. A week before parliament debates imposing a ban, the German Ethics Council has failed to issue a clear recommendation. (08.03.2011)

Pre-implantation genetic diagnosis - for or against?