Germany's watchdog on media concentration Tuesday rejected plans by publishing giant Springer to take over private broadcaster ProSiebenSat.1, making it highly unlikely that the merger will go through. 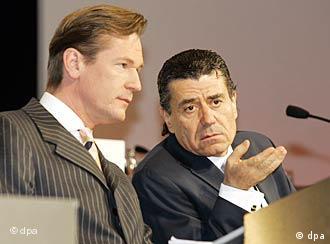 Springer CEO Döpfner (left) might have to return ProSiebenSat.1 to Haim Saban (right)

The decision by the so-called Commission to Investigate Media Concentration (KEK) came shortly after reports that Germany's antitrust office, the Federal Cartel Office, is also likely to reject the 3.5-billion-euro ($4.32-billion) merger. An official decision of the latter is expected by the end of next week. 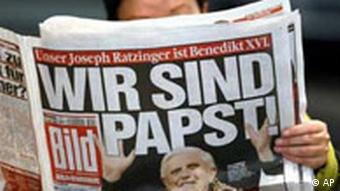 Springer's media empire is currently largely focussed on the print sector, the mass-circulation Bild tabloid with roughly 12 million readers being its crown jewel. Last August, Springer announced that it had agreed to buy ProSiebenSat.1 -- Germany's largest private television group -- from a group of US investors.

KEK officials said the merger would bring together too many different media under one roof, resulting in a "dominant power of opinion" for the newly formed company.

The cartel office has voiced concerns about the effects the takeover would have on the advertising market for both the television and print market. It has given Springer until Thursday to come up with a new proposal. 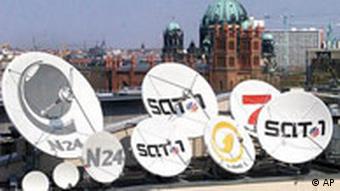 If Springer holds on to Bild, it is -- under federal anti-monopoly rules -- not allowed to own one of the main ProSiebenSat.1 television channels -- either Sat.1 or ProSieben -- which would devalue the worth of any deal.

Springer CEO Matthias Döpfner on Tuesday meanwhile defended the proposed takeover, saying that the control bodies were overlooking global and digital shifts in the media world.

He added that the company would look for other ventures outside Germany if the deal is rejected.

"We will take that and try our luck in the digital markets and abroad," he said, according to the AP news service.

Bringing in a partner?

According to a report in the Süddeutsche Zeitung newspaper, Springer is also contemplating bringing in SBS Broadcasting, which owns private commercial television and radio stations in western and central Europe. SBS could then buy ProSieben or Sat.1 to win approval from the deal. Springer officials declined to comment on the report. 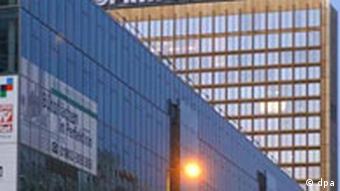 The KEK's decision is not final, however, as Springer officials can still call on Germany's state media boards, who could overturn the rejection of the deal.

But Jörg Tauss, the media policy expert for Germany's Social Democrats in parliament, called on the directors of state media boards not to take such a step. He welcomed the KEK decision, saying that it guaranteed media diversity in Germany.

German publishing mogul Axel Springer's fifth wife and widow, Friede Springer started her career in the publisher's house as a nanny. Now she owns the company and is among Germany's richest people. (Dec. 8, 2005)

Too Much Tabloid Power in Germany?

Germany's antitrust head Ulf Böge said he was concerned the mass daily "Bild" could get too powerful should a merger between Springer publishing and broadcaster ProsiebenSAT.1, go through. (Sept. 1, 2005)

Julian Reichelt had been accused of leading a workplace culture that "mixed sex, journalism and company cash" at Germany's most-read newspaper.