German Marines Foil Pirate Attack on Bremen-Based Ship Off Somalia | Germany| News and in-depth reporting from Berlin and beyond | DW | 04.03.2009

The German navy detained nine people Tuesday following a dramatic action to head off a pirate attack on a German merchant vessel off the coast of Somalia. 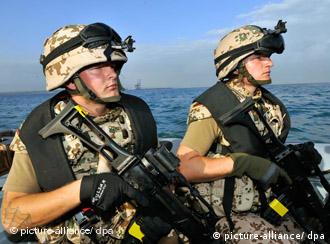 German marines, backed by US forces, responded to the attack on the MV Courier

The frigate Rheinland-Pfalz received a distress call early Tuesday from the German-owned ship saying she was under fire from pirates armed with bazookas and machine guns, a statement said.

A tricky deliberation process has started in Germany, which has to decide how to legally proceed with the pirates.

This is the first time in the history of modern Germany's navy that anyone has been apprehended at sea.

According to German Defense Ministry in Berlin, a vessel owned by a Bremen-based shipping company, the MV Courier, was attacked by pirates during early morning Tuesday.

The ministry said that the pirates were armed with anti-tank rocket launchers and firearms.

US Navy helicopters thwarted the attack with the help of marines from the Rheinland-Pfalz a short time later, seizing the pirate's boat and arresting nine people, the Defense Ministry said.

"(The pirates) are currently being questioned about who they are and their activities," the German military said, adding they had 48 hours to interrogate the pirates.

Some of the pirates were from Sudan, the Defense Ministry added.

The German sailors encountered a sizeable weapons stash, which they threw overboard for security reasons, according to Defense Minister Franz Josef Jung.

A question of procedure 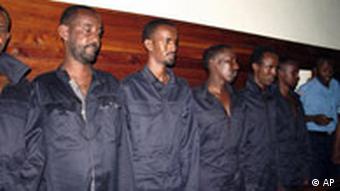 Pirates which have been caught often go on trial in Africa

Germany must now decide how to proceed with the men, and whether to try them in Germany or hand them over to another country. Basic medical checks were carried out on them, on board the Rheinland- Pfalz.

Now it needs to be established whether German interests are at stake, in which case the country's legal system can swing into action.

A specially convened commission, including the Interior, Foreign, Defense and Justice Ministries, is expected to decide Wednesday whether to proceed under German law.

If this is the case, the pirates would initially be taken to Djibouti, where the European Union's anti-pirate mission is based. From there, German federal police agents would collect the men and transfer them to Hamburg.

The legal status is further complicated by the fact that the ship, although registered in the German city of Bremen, was sailing under an Antiguan flag.

The German navy joined the EU's anti-pirate mission Atalanta at the end of 2008 with what Jung described then as a "robust mandate." 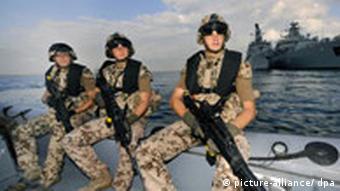 The presence of international troops has cut the number of attacks

In 2008, pirates seized more than 200 ships off the Somali coast and in the Gulf of Aden, which is now patrolled by naval warships from the United States, EU and other countries including China, demanding millions of dollars in ransom.

In November, pirates captured the world's attention when they hijacked the Saudi-owned super-tanker Sirius Star, carrying two million barrels of crude oil, and demanded a 25-million-dollar (19.9 million-euro) ransom for the ship and its crew.

The pirates, heavily armed and using high-powered speedboats, prey on the key maritime route leading to the Suez Canal, through which an estimated 30 percent of the world's oil transits.

They are believed to number around 1,200 former and seasonal fishermen and coast guards, many of them from lawless Somalia, which has been ravaged by years of conflict and starvation.

However, the number of pirate attacks has been sharply reduced this year following the sending of more ships to the area, including from the European Union's anti-piracy operation Atalanta in mid-December.

NATO has said it will launch a second anti-piracy naval mission off the coast of Somalia in the spring. German, Dutch and Spanish ships in the area would be involved in the brief operation. (20.02.2009)

There's been a drop in pirate attacks off the Somali coast since the European Union launched coordinated naval operations in the region. But pirates still abound. (04.02.2009)

The captain of a German Navy warship on an anti-piracy mission off Somalia said Friday the mission was succeeding, even though a German-owned gas tanker was snatched by pirates the previous day elsewhere on the coast. (30.01.2009)