A ruling by Germany’s highest court that the EU’s reforming Lisbon Treaty is compatible with German basic law has been received in Germany and Europe as an encouraging step forward. 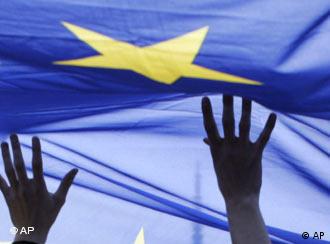 The Lisbon Treaty has moved a step closer to ratification

The court rejected complaints from Germany's far-left party and a maverick conservative member of parliament that the treaty would transfer too much power to Brussels. It said the reforms were fundamentally in line with the country's constitution, but it set conditions.

That led Christian Democrat Chancellor Angela Merkel to hail the ruling as a "good day for the Lisbon Treaty."

"The important message of the day is that the Lisbon Treaty has cleared another significant hurdle. I am very pleased about that," Merkel told reporters in Berlin after the judgement.

The German president, Horst Koehler, has waited for the court decision before signing the bill ratifying the treaty. The court has now required parliament to change that bill to ensure that German constitutional provisions are respected. It said the law must make clear that the upper and lower houses of parliament have a role to play in shaping decisions taken in Brussels.

The German parliament, the Bundestag, will hold special sessions on August 26 and September 8 to debate the legislation allowing the treaty to be ratified, said a spokeswoman for the centre-left Social Democrats, part of the governing coalition.

Merkel said the ruling parties planned to agree on the required changes before the September 27 federal election. 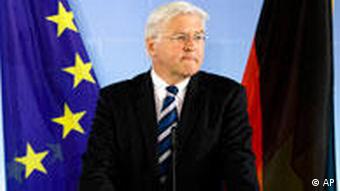 Steinmeier says the treaty should be passed this year

"The clarity with which the Constitutional Court has decided that Lisbon is completely compatible with the Basic Law is pleasing," he said Tuesday. "I'm sure the treaty will be ratified this year."

European Commission President Jose Manuel Barroso also welcomed the ruling, saying he was "confident we can complete the process of ratification of the Treaty of Lisbon in all countries by the autumn."

EU-wide ratification still awaits a second referendum on the treaty in Ireland, as well as approval by the eurosceptic presidents of the Czech Republic and Poland, which are awaiting the outcome of the Irish vote.

Irish voters rejected the treaty last year over fears it could affect the country's policies on neutrality and abortion.

The Lisbon Treaty is a watered-down version of the EU constitution vetoed by French and Dutch voters in 2005. It aims to give the 27-nation bloc stronger leadership, a more effective foreign policy and a fairer decision-making system. All EU member states must approve the treaty for it to be formally adopted. 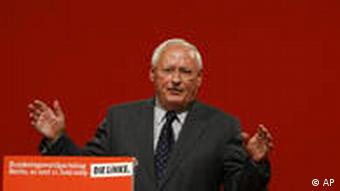 The case against the treaty was brought by an unlikely coalition of plaintiffs. Both the far-left political party Die Linke and the right-wing Bavarian parliamentarian Peter Gauweiler, as well as group of professors, argued the Lisbon Treaty would allow EU leaders to circumvent national parliaments and push decisions through in Brussels instead. Die Linke issued a statement on its website following the court's announcement saying it too was encouraged by the decision.

The party said the fact that the ratification process had been "stopped was a sign of how seriously the Bundestag's right to participation would be hindered by the Lisbon Treaty."

They interpreted the decision as a "resounding box on the ears of the CDU, CSU, SPD, FDP and the Greens."

Die Linke said "the judgement strengthens parliamentary possibilities for correcting the market-radical, antisocial and militaristic Lisbon Treaty … the treaty therefore must be more social and democratic."

Gauweiler, who sits in the Bundestag for the Christian Social Union, the Bavarian sister party of the Christian Democrats, said the court had gone further than he expected, strengthening the rights of the Bundestag to have the final say on whether European law applies in Germany. He told the online edition of Spiegel news magazine, "What Karlsruhe has laid down is something very different from the way EU issues have been nodded through until now."

Meanwhile, Renate Kuenast, the head of the Greens parliamentary group, welcomed the temporary halt in the ratification process of the EU reform treaty.

"The (court's) judgment is a double success," Kuenast said. "It is a clear ‘yes' to the Lisbon treaty. The rightist and leftist plaintiffs have been rejected … and the Constitutional Court has consciously dealt out more rights to parliamentarians."

She said the move was a success for parliamentary democracy. "Now the members of the Bundestag are in a very strong position as they reformulate the bill accompanying the treaty."

Vaclav Klaus, the Czech President, has stated that he will be the last in the European Union to make up his mind on the Lisbon Treaty. (24.06.2009)

With its controversial six-month EU presidency coming to an end, the Czech Republic's eurosceptic President Vaclav Klaus made sure Saturday that the incoming Swedes knew what to expect from the Lisbon Treaty debate. (21.06.2009)

Interview: Center for European Policy Studies on the significance of the decision