A German court has issued an arrest warrant for former Argentinian president Jorge Videla, who, along with other high-ranking military officers, may have been behind the deaths of two Germans. 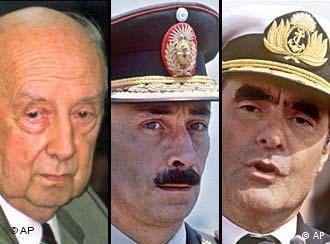 Human rights organizations estimate that more than 30,000 people were kidnapped, tortured and killed between 1976 and 1983 under Argentina's military dictatorship. The regime systematically carried out kidnappings meant to keep Argentinians in a permanent state of fear and terror. In addition to the Argentinian victims, as many as 100 Germans and people of German origin were killed.

For nearly five years now, public prosecutors in Nuremberg have been investigating 69 members of Argentina's military dictatorship who are thought to have played a role in the murders of German citizens.

On Wednesday they went a step further by issuing an arrest warrant for former Argentinian President Jorge Videla, the former commander-in-chief of the Navy, Emilio Massera, and Gen. Carlos Guillermo Suarez Mason, formerly head of an army corps division. The three men have been linked to the murders of German student Klaus Zieschank and sociologist Elisabeth Käsemann in the 1970s.

"The accused didn't themselves shoot," Bernhard Wankel, a spokesman for the Nuremberg public prosecutor's office told DW-WORLD. But they can be tried for "indirect guilt." They were in charge of an apparatus whose aim and function led automatically to the victims being killed, the Nuremberg prosecutors stated in a press release.

But the three men, all of whom are in their late seventies, are unlikely to face a trial in Germany. First, the German government must decide whether it will request the men's extradition, which the Argentinian authorities may refuse. Officials with the human rights organization Cels in Buenos Aires quoted by the news agency DPA said they believed the request would be rejected. 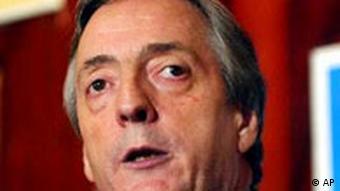 Several months ago, current Argentinean President Nestor Kirchner, himself a torture victim, lifted amnesty laws that protected crimes committed under the military dictatorship. The move gave Argentinean public prosecutors the freedom to investigate the offenses, including those Videla, Massera and Suarez Mason are accused of having committed. The three have already been put in pre-trial detention, which due to their age, was later changed to house arrest. Observers say the government would prefer to have the accused tried at home.

Suarez Mason and two other high-ranking military officers already avoided a previous extradition effort in 2001 when the government refused to honor a request from the Nuremberg court. "The Argentinean Supreme Court has never said whether the refusal of the extradition request was legal," Wankel said.

Suarez Mason was one of the most important actors in the military dictatorship. He oversaw the illegal arrests and was in charge of more than 360 secret torture centers. The German arrest warrant for him has been expanded.

Munich student Klaus Zieschank went to Buenos Aires as a 24-year-old in 1976 to do an internship. Two days after the March 24 military coup, he was kidnapped. Zieschank was tortured and he was killed in May 1977. His body was thrown into the open sea from a military plane, like those of thousands of others.

Elisabeth Käsemann, who was then 29, worked as a sociologist in the poor neighborhoods of the Argentinean capital. She was kidnapped by Argentinean security forces in March 1977 and tortured. She was killed by gunshot wounds from close proximity to the neck and back.

So far, the only successful conviction imposed on Videla has been child abduction, the only offense he has been accused of that was not protected by the amnesty. More than 500 children whose parents were killed in the torture centers were forcefully adopted by members of the military.

The Coalition Against Impunity, a German organization made up of human rights activists, church representatives and lawyers that started legal action on behalf of the victims' families, welcomed the decision to issue the arrest warrants.

"It's not a surprise for us, but we still see it as a great success," Wolfgang Kaleck, one of the coalition's lawyers told DW-WORLD.

But Kaleck said he is disappointed that legal proceedings against Juan Tasselkraut, a former Mercedes Benz plant manager in Argentina, have been suspended. He has been accused of denouncing outspoken shop stewards to the military. At least 15 shop stewards from the Buenos Aires factory disappeared during the military dictatorship.

As Argentina works to put its troublesome past behind it, families of German victims of the regime also continue to seek justice and resolution.

Though "we will never know who fired the shots" at Zieschank and Käsemann, Wankel said, "we have the people who pulled the strings."

As one of Argentina's top prosecutors, Luis Moreno Ocampo fought military dictators and corrupt officials. On Monday, he began battling despots and ruthless killers as the world's chief prosecutor. (June 16, 2003)