Germany’s interior minister has expressed concern about a rise in crime attributed to right-wing extremists. The problem has been highlighted by a series of neo-Nazi murders that has drawn worldwide attention. 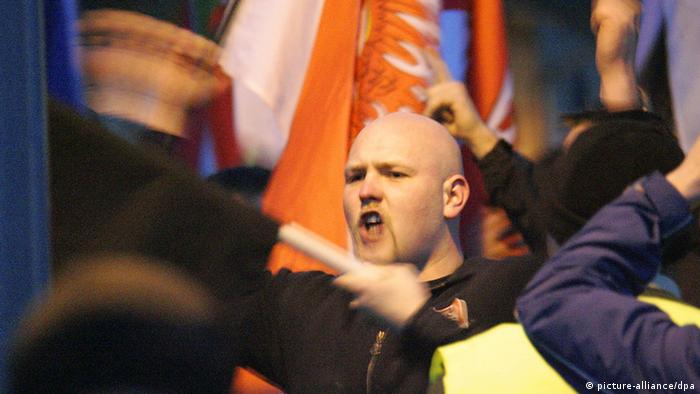 Speaking in an interview with the newspaper Tagesspiegel am Sonntag German Interior Minister Hans-Peter Friedrich said that preliminary statistics for 2012 indicated that right-wing crime had risen by 4 percent compared with the previous year. The authorities investigated 17,600 cases of extremist-related offenses in 2011.

Friedrich, who didn't provide and precise figures for 2012, said he was particularly concerned by a 2 percent rise in violent crime compared with 2011, when 828 cases were reported.

"There is a potential for violence among neo-Nazis that we must not underestimate," Friedrich said. "What worries me is that the threshold of inhibitions about committing acts of violence has dropped dramatically."

Friedrich said he would raise the issue with his counterparts from Germany's 16 states at their next meeting.

The danger of right-wing violence has received heightened attention in Germany since November 2011, when two members of the self-styled neo-Nazi group National Socialist Underground were found dead in an apparent murder-suicide in the eastern city of Zwickau.

They and a third member of the group are alleged to have murdered nine immigrant shopkeepers and a German policewoman between 2000 and 2007.

The group member and four other suspects are to be put on trial next month on charges that include complicity in the apparently anti-foreigner murders.

It was not until last year that German police and intelligence agencies conceded that they had long failed to link the far-right suspects to the series of killings.