German Government Under Pressure to Deliver on Crisis Promise | Germany| News and in-depth reporting from Berlin and beyond | DW | 06.10.2008

German Government Under Pressure to Deliver on Crisis Promise

The German government is under pressure to deliver as it races to reassure investors and individual savers that it will protect Europe's biggest economy from falling victim to the global financial crisis. 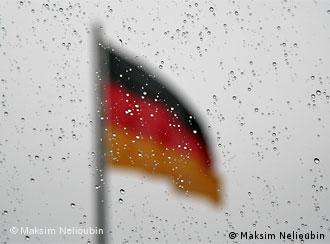 Doom and gloom: Germany has not escaped the financial storm sweeping in from the US

The stock exchange may not have got the message however as shares tumbled seven percent Monday in line with heavy losses elsewhere in Europe and Asia as Wall Street plunged too.

Berlin hoped a new 50-billion-euro ($68-billion) rescue plan for the distressed mortgage lender Hypo Real Estate (HRE), a Munich-based company that lends to commercial developers and municipalities to build hotels, offices, roads, airports and the like, and a blanket guarantee on private bank accounts would prevent panic from seizing a nation of savers.

Finance minister Peer Steinbrueck said he did not rule out raising state guarantees on HRE credit lines and that there was "a plan B in the drawer" to ensure the banking sector did not collapse.

Steinbrueck did not provide details but told a press conference: "We are aware that we will not get very far with case-by-case solutions."

The bank is now to be provided with credit lines worth a total 50 billion euros, of which a little more than half was to be guaranteed by the state.

HRE shares were hammered in afternoon trading on the Frankfurt stock exchange however, losing 35.15 percent to 4.87 euros.

Meanwhile, the government said it would guarantee private bank accounts, estimated to be worth 1.6 trillion euros.

Economics professor Hans-Peter Burghof of the University of Hohenheim told German radio that amount represented "the biggest guarantee in history.

"Never has anyone anywhere in the world guaranteed such a sum in two simple sentences," he said, while noting that in principle the idea of giving guarantees was to ensure they would not be needed. 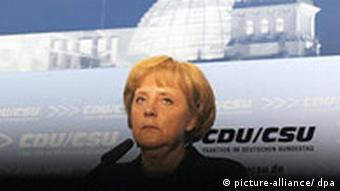 Merkel tried to instill calm in investors and savers

Chancellor Angela Merkel told reporters on Sunday that the government "will not allow an institution's crisis to become a crisis for the entire system."

"We are saying to women and men savers that their deposits are safe. The federal government promises that," Merkel said.

Questions about the German government assurance of an estimated 1 trillion euros ($1.4 trillion) of personal savings at German banks meanwhile were being raised on Monday. Neighbouring nations came under pressure to follow Germany's lead.

Berlin described the assurance to savers, issued by Chancellor Merkel in two sentences in front of television cameras on Sunday, as "able to be relied on."

Berlin has not announced any legislation on a deposit-insurance scheme beyond existing bank-industry guarantees. Officials said they were still talking to banks on how to shape the guarantee.

Merkel's spokesman Ulrich Wilhelm said in Berlin, "It's a political statement that can be relied on and is decisive." The German government and its capabilities stood behind this assurance, he added.

Jonathan Todd, spokesman for European Competition Commissioner Neelie Kroes, said: "We were informed by the German authorities of their intentions.

"The commission notes that the measures seem to be limited to retail bank deposits, and so less liable to give rise to distortions of competition."

Todd added, "In general, retail deposit guarantee schemes for savers can be an appropriate policy response to fears regarding the stability of the banking system."

The crisis reached Germany with the stumble by HRE and the embarrassment which followed a 35-billion-euro bail-out a week ago which proved inadequate.

Global Insight senior economist Timo Klein told reporters: "Since they were unable to correct themselves, financial markets looked to the German government (for help). The DAX is now looking for a general plan for the banks, maybe as early as Wednesday." 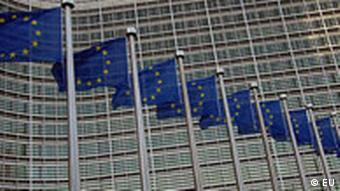 The Commission is keeping an eye on developments

In Brussels, the European Commission said the German decision regarding private accounts appeared to conform to EU competition rules and did not pose the same problems as a similar announcement by Ireland.

"The commission notes that the measures seem to be limited to retail bank deposits, so (it is) less liable to give rise to distortion of competition," said commission spokesman Todd.

In Britain, Prime Minister Gordon Brown's spokesman said London understood that Berlin did not plan to pass legislation on the guarantees and added: "We have been in the process of seeking clarification from Germany as to what they have committed themselves to."

An initial guarantee issued by the Irish government to banks has drawn criticism from several European Union countries which feared it could distort competition by making Irish bank accounts more attractive to EU savers. 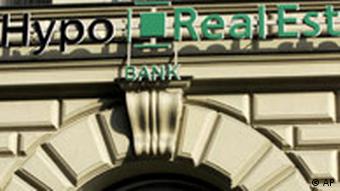 The HRE has tottered on the verge of collapse for days

Meanwhile, as Germany sought to calm the public with a "decisive" pledge about savings, property lender HRE was under further pressure from other banks and Berlin to sack its chief executive.

He charged that HRE, at the same time as seeking state aid, had used lawyers against the government so as to "escape its responsibilities."

In Monday trading, HRE stock declined as much as 40 percent from Friday's close as investors worried that the new bail-out might also prove inadequate.

In Brussels, the EU Commission's Todd, said, "As soon as the details are notified to us we will assess very quickly whether the new measures are compatible with (the EU's) state aid rules."

A newspaper, Die Welt, was to appear Tuesday with a report that HRE was blaming its plunge from grace on a downgrading by ratings agencies that allowed creditors to call up loans.

Berlin has refused demands by the banking industry to nationalize HRE, a lender seen in Germany as too important to let fail.

Steinbrueck said financial securities that have been disdained in the past by central banks would be used as security for much of the 15-billion-euro expansion of the HRE bail-out.

The European Central Bank (ECB) had agreed to this, he said.

"Nobody can forecast just yet how much this paper is actually worth," he added.

The government and banking-industry guarantee that backstops the new bail-out remains limited to 35 billion euros, as announced one week ago.

The German government's decision to guarantee private deposits is nothing more than a psychological gesture intended to calm markets and investors, writes DW's Andreas Becker. (06.10.2008)

In a step away from its long-held policy of aiding failing financial institutions on a case-by-case basis, the German government is reportedly examining ways to offer a safety net to the country's entire banking sector. (06.10.2008)

The German government, together with banks and insurance companies, agreed late Sunday on a 50-billion-euro ($68 billion) deal to bail out the country's stricken commercial property lender, Hypo Real Estate. (06.10.2008)