German FM: European Aid to Palestinians Can Help Peace | Germany | News and in-depth reporting from Berlin and beyond | DW | 27.11.2007 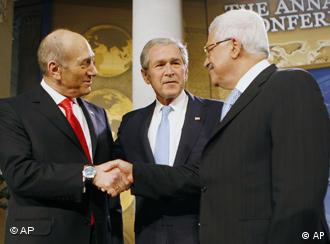 Olmert, Bush and Abbas said they want an agreement by 2008

Channelling aid to the region controlled by Palestinian President Mahmoud Abbas' Fatah faction will show Palestinians that peace efforts can pay, Steinmeier said on the fringes of the US-sponsored Middle East conference in Annapolis, Maryland, DPA news service reported. Fatah's rival, Hamas, which controls the Gaza Strip, did not send representatives to the summit.

Steinmeier gave no details, but the European Union is the biggest aid donor to Palestinians. At the same time, Germany traditionally is the EU's strongest supporter of Israel because of the shared history of the Holocaust.

Steinmeier welcomed Bush's announcement that Abbas and Israeli Prime Minister Ehud Olmert had agreed to resume preliminary peace talks on Dec. 12 with a view toward sealing an agreement in 2008.

"The time is right for a new effort," Steinmeier, who headed one of 40 international delegations at the conference, told reporters. 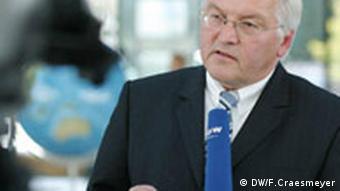 Steinmeier is hopeful that a peace agreement will be reached

Steinmeier praised both leaders for addressing the other side's problems.

"It was apparent in the speeches by Abbas and Olmert that they were not just addressing their own people but speaking with a great amount of sensitivity about the position of the neighboring population," he said, according to AFP news service.

Olmert, in his speech to the conference, cited "the constant suffering that many in Israel have experienced, because of our history, because of the wars, the terrorism and the hatred toward us," but he also said Palestinians "have suffered for many years."

Steinmeier said Olmert had also extended a hand to the wider Arab world with his remarks.

"I think the Arab world understood that Prime Minister Olmert found several respectful words for the suffering of the Palestinian people, to which he also wants to put an end," he said.

After key Arab nations agreed to attend a Middle East summit in Annapolis this week, Chancellor Angela Merkel stressed Germany's wish for the talks to be a success. But few politicians expect a breakthrough. (26.11.2007)

German Foreign Minister Frank-Walter Steinmeier plans to visit the Middle East in the coming weeks as part of preparations for the Mid-East conference due to take place in the United States at the end of November. (19.10.2007)

The European Union announced Monday that it would immediately normalize ties with the new Palestinian government amid plans to provide the cabinet with funds and send aid to the Gaza Strip. (18.06.2007)

Do you think that EU countries should increase financial aid to the Palestinian territories? Will it help the peace process in your opinion? Please include your name and country in your reply.