Judges in the German city of Dresden has jailed a former police officer who was found guilty of killing a victim he met on a cannibalism website. The court watched a video that was recorded showing the murder. 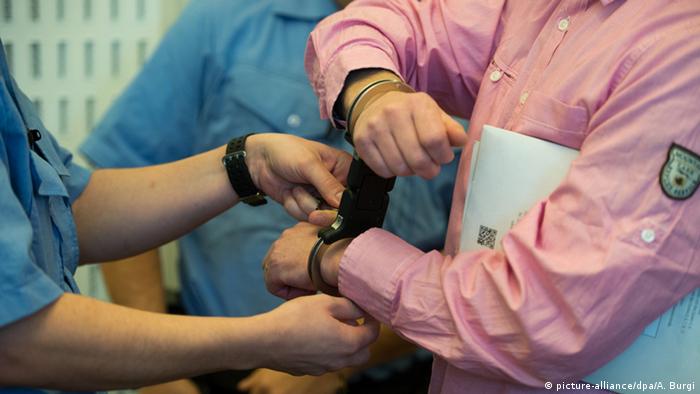 The court in Dresden sentenced Detlev G. to eight-and-a-half years in prison after finding him guilty of killing a victim he met on a website for cannibalism fetishists.

"He was found guilty of murder and disturbing the peace of the dead," said regional court presiding judge Birgit Weigand.

The defendant was arrested in November 2013, accused of killing Polish-born Wojciech Stempniewicz two years earlier. The victim was said to have willingly visited the 57-year-old former policeman's home, a bed and breakfast inn in the mountain town of Hartmannsdorf-Reichenau, near the Czech border.

The court heard that 59-year-old businessman Stempniewicz, from Hanover, had contacted the accused online, on a cannibalism site that boasted more than 30,000 registered members. In a written dialog with Detlev G, he was said to have expressed a desire to be "slaughtered" when the pair met.

Their messages were titled "Schlachtfest," the German term for a country feast after the slaughter of a pig, with Stempniewicz naming himself "Heszla-Longpig."

The murder verdict came despite the defense team arguing that Stempniewicz had hanged himself in the cellar at Detlev G's home.

The accused, a father of three adult children who was described by neighbors as "friendly and polite," was then said to have dismembered the body with a knife and electric saw, burying the pieces in his garden.

A gruesome 50-minute video of the dismemberment was recorded, in which Detlev G muttered: "I never thought I would sink so low."

While Stempniewicz dreamed of being killed and eaten, the court heard, his killer dreamt of being a cannibal. However, there was no evidence that body parts were eventually eaten.

Other chat partners of the accused testified that he had backed out of arranged plans when they traveled to meet him. Detlev G and his victim had extensive contact before the final fatal date, the court heard.

The accused's defense attorney Endrik Wilhelm called for an acquittal, expressing fears that the media attention had created a bias against his client. Detlev G had been married in a civil union to his male partner for 10 years before the events, but the pair were said to have split before the trial.

The case has drawn parallels with that of the German cannibal Armin Meiwes, who admitted that he killed, mutilated and ate a lover - who he had met online - in 2001. Meiwes was sentenced to life imprisonment in 2006.