The German embassy in Sudan became the target of anger over an anti-Islam film. Protesters in Khartoum stormed the embassy, as similar attacks on US diplomatic stations continue. 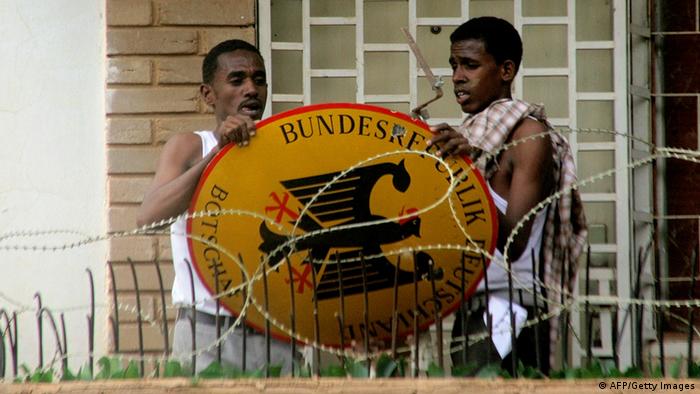 Sudan's police force used tear gas on Friday in a bid to stop more than 5,000 demonstrators from storming the German and British embassies, but some protesters still made it through the gates of the German embassy.

Protesters threw stones at the two neighboring outposts in Khartoum before they stormed the main gates of the German embassy. They attacked its facade and tore down the flag, replacing it with a black Islamic one before setting fire to the building.

German Foreign Minister Guido Westerwelle confirmed the attack on Friday but said that the embassy's staff is safe.

"I sharply condemn the attacks on the German embassy in Khartoum," Westerwelle said in a press conference in Berlin, noting that the embassy was closed for Friday prayers, as is customary in Muslim countries. "I demand from the Sudanese authorities that the safety of the German embassy will be guaranteed immediately."

Westerwelle, who delivered a statement first in German and then in English, condemned what he called the "anti-Islam hate video" that has caused an uproar in many countries. It has led to attacks at American embassies and consulates as well. 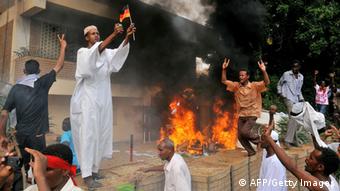 The privately made American film, called "Innocence of Muslims," portrays the prophet Muhammad as a womanizer, homosexual and child abuser. The pictorial portrayal of Muhammad is forbidden in Islam.

"I understand the outrage of the Islamic world because of this anti-Islam hate video," Westerwelle said. "This video is insufferable and hurts the feelings of millions of believers. I emphatically condemn this video, but it is no excuse for this violence. This violence must end."

The latest American embassy targeted by protesters was in the Tunisian capital, Tunis. There a group of demonstrators scaled the walls of the facility. Witnesses reported a large fire burning inside the compound, and that police fired warning shots and used tear gas against the crowd of several hundred people. Three people were killed and an additional 28 were injured in the clash.

The US embassy in Khartoum was also breached by demonstrators climbing over security walls. One person was killed after being struck by a police vehicle near the embassy.

Pentagon spokesman George Little told reporters on Friday in Washington that a team of Marines has been sent to Yemen to provide additional security measures at the embassy in Sanaa as a "precautionary measure." Protests have taken place this week at that embassy as well.