How well will German political leaders score when quizzed on their own party's platform? The latest Wahl-O-Mat has the answer - and it can also lend a hand to the nearly 50 percent of undecided voters in Germany. 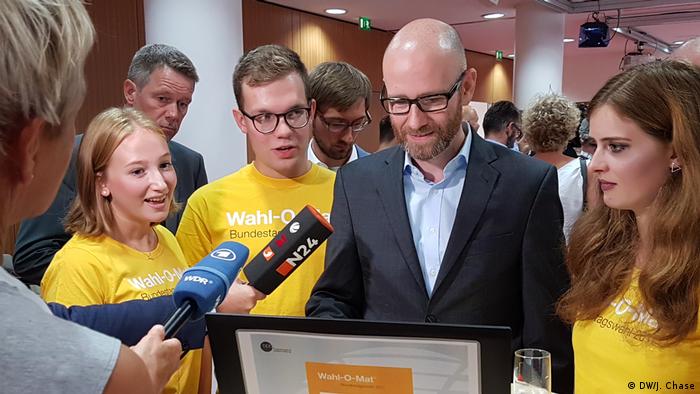 Animal rights, weapons exports, health care, fake news, refugees, sovereign debt, retirement and marijuana legalization. Those are just some of the issues on voters' minds ahead of Germany's federal election next month - and some of the issues the Wahl-O-Mat, Germany's official voting advice application (VAA), quizzes its users on.

With a reported 46 percent of voters undecided on which way to cast their ballots, the unveiling of the latest Wahl-O-Mat on Wednesday came with an extra sense of buzz and anticipation.

Since first launching in 2002, the Wahl-O-Mat (roughly translated as "Vote-O-Meter") has become an engrained part of the German election process. At Wednesday's presentation in Berlin, the president of the Federal Agency for Civic Education (bpb), Thomas Krüger, described the voter tool as Germany's "democratic national sport."

Read more: #GermanyDecides: On the road to the elections​​​​​

The underlying principle of VVAs is straightforward: using a series of questions, the tool works out the user's political proximity to the political parties. All 33 parties on the election ballot across Germany, bar the Magdeburg Garden Party in Saxony-Anhalt, provided their input and authorized their policy stances.

While VVAs exist in many countries, few boast the kind of fanfare enjoyed by Germany's Wahl-O-Mat. According to Krüger, some 13.3 million users used the tool ahead of the last federal election in 2013 and, according to market research firm YouGov, one in three voters intend to consult the app in the three-and-a-half weeks leading up the federal election on September 24.

No wonder the general secretaries from all the major German parties were on stage to test out this year's edition, including Peter Tauber of Chancellor Angela Merkel's conservative Christian Democratic Union (CDU) and Hubertus Heil of the Social Democrats (SPD), which has sent Martin Schulz as its candidate for the Chancellery.

Since its inception 15 years ago, the Wahl-O-Mat's main focus has been to mobilize younger voters. In fact, all 38 questions posed in the app chosen by a group of young and first-time voters.

"Young people have contributed towards this product, which is aimed at furthering the political education," Krüger said. "That is what lies at the very core."

According to YouGov, half of all voters aged between 18 and 29 intend to consult the Wahl-O-Mat before casting their ballots.

The majority of those using the tool are already politically engaged, but around 6 percent to 10 percent of users go on to their cast their ballots after having previously expressed no interest in voting, according to Stefan Marschall of the Heinrich Heine University in Dusseldorf, who for years worked with the bpb in developing the voter tool.

"We have found that among those who are usually more distanced from politics, the Wahl-O-Mat does have an effect on getting people to participate in the election," Marschall told DW. That could mean a one to two percent bearing on the total voter turnout.

An education, not a recommendation

Krüger emphasized during the unveiling that the tool should be treated as an educational tool, and not something that dictates to young voters which way to vote, pointing out that "the world is more complicated than an assertion made in the Wahl-O-Mat." 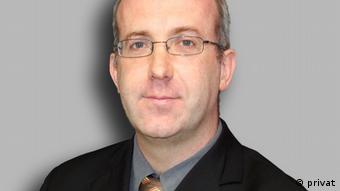 Dr. Stefan Marschall said the Wahl-O-Mat should be an entry into politics, not a withdrawal

"The voter's choice is of course much more complex and is usually affected by a host of other factors, namely the candidate, something that it isn't taken into account at all in the tool," said Marschall. "We state in the tool that it is intended to be an entry into politics, not a withdrawal from politics. When share and discuss their results on social, then the tool has fulfilled its purpose."

And besides, as Marschall points out, more often than not, people usually align with their preferred party anyway - a sign that the Wahl-O-Mat is working.

How the party chairmen fared

If, as bpb President Krüger suggested, the Wahl-O-Mat does indeed rank among Germany's national sports, then its greatest spectacle is to see how closely the parties' officials align with their own party platforms.

Flanked by young volunteers, Tauber, Heil and their counterparts all registered their views on issues ranging from weapons exports to animal husbandry to get the app's recommendation on which party best suited them.

The CDU's Tauber kept up a steady stream of banter with the volunteers as he tapped away. Often the answers came easily. "The sale of cannabis should be legalized -  no I can't agree with that," he said, to which a volunteer to his left responded, "That's too bad." 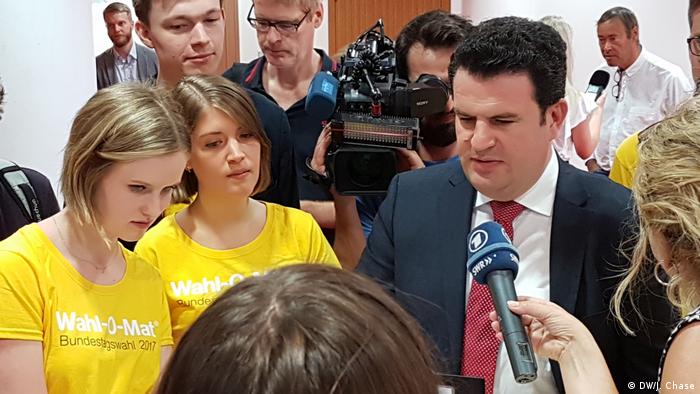 On other issues, even the man in charge of Chancellor Angela Merkel's re-election campaign had to reflect for a bit. "The solidarity supplement with eastern Germans should be completely phased out by 2019 – it should be phased out but not fully because we've only just begun," said Tauber. "I'm going to have to stay neutral on that one."

In the end, he ended up in 99. "You lose, Tauber," the SPD's Hubertus Heil quipped after scoring a perfect 100 percent match with his party.

However, Tauber was quick to point that his 99 percent score rested on a technicality. "I said I was in favor of a ceiling," he said, referring to the number of asylum seekers arriving in Germany. The CDU manifesto makes no such pledge, although it does appear in the Christian Social Party's so-called "Bayern-Plan" (Bavaria Plan). As sister-parties, the Wahl-O-Mat groups the CDU and CSU together.

Still, with a two-digit lead in the polls, it's unlikely the CDU general secretary is too concerned about a 1 percentage point difference with the Wahl-O-Mat.

You can try the Wahl-O-Mat online or download the smart phone app.

COVID: Germany rolls back some lockdown restrictions 40m ago

Myanmar: Police crack down on protests as workers strike 45m ago