The German economy, the biggest in the 13-country Eurozone, boomed in the last months of 2006. The strong year-end performance caused the growth rate for the entire year to be revised upwards Tuesday. 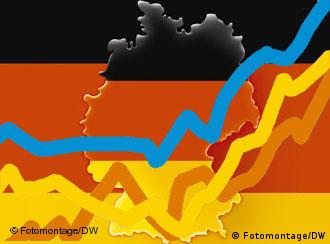 Germany's economy is finally looking up after months of stagnation

The German economy surged to a strong finish in 2006, leading to a growth rate of 2.7 percent, according to the Federal Statistics Office.

The Federal Statistics Office had previously estimated the German gross domestic product (GDP) to have expanded by 2.5 percent in 2006. But that figure was revised upwards due to a strong performance during the last three months of the year.

The GDP rose by 0 .9 percent in the fourth quarter of 2006, compared with the third quarter. 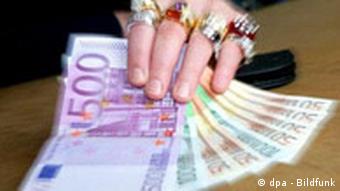 Consumer spending was also a factor in the economic boom

The economic growth also brought more employment opportunities. The statistics office also reported that in the fourth quarter, the number of people employed rose by 452,000 persons, which equals a 1.2 percent increase from a year before.

Uncertainty remains over how the German economy will fare in 2007. On Jan. 1, sales tax increased from 16 to 19 percent.

"Germany is the euro-region's growth engine and we're getting the impression that the transition into 2007 was maybe smoother than expected ahead of the value-added tax increase this year,'' Kornelius Purps, a fixed-income strategist at Unicredit in Munich told Bloomberg News.

The 2006 economic performance was the best since 2000 for the eurozone's largest economy.

Germany to Lose Export Champion Title to China in 2008

Germany's coveted title of "export world champion" is to be handed over to China next year, according to figures released by the German Office of Foreign Trade. (11.02.2007)

The expected global economic slowdown and a sharp rise in sales tax will have only a limited impact on the German economy this year when unemployment is expected to fall to a record low. (31.01.2007)

American vacationers at Germany's Christmas markets didn't have much to smile about when they exchanged their travelers cheques as the European currency benefited from robust German business confidence figures. (20.12.2006)