Official figures released Friday show Germany's largest single-quarter economic growth since reunification in 1990. The economic revival, far better than expected, is based largely on a rise in exports. 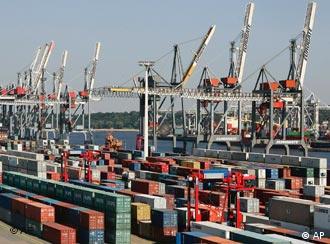 The low exchange rate may have helped boost exports

Germany's economy grew at a greater rate than forecast in the second quarter of 2010, with gross domestic product 2.2 percent higher than during the first three months of the year.

In comparison with the same time last year, Germany's economy grew by 4.1 percent for the period between April and June according to information released by the Federal Statistical Office on Friday.

"Reunified Germany has never seen such quarterly growth before," the office said in a statement. Analysts had forecast a growth rate of around 1.3 percent during the second quarter. 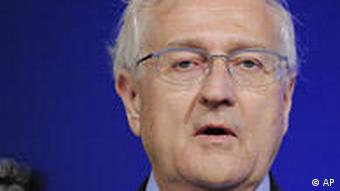 Bruederle had high hopes for the year as a whole

Germany's economic revival has been based largely on exports; the country is the world's second biggest exporter after China. But the statistics agency also reported that household consumption and government expenditure contributed to the unexpectedly rapid growth.

Economy Minister Rainer Bruederle said he believed growth far exceeding two percent was possible for the whole of 2010. "At the moment we are experiencing 'extra large' growth," said Bruederle.

Exports have been bolstered by demand from China and other emerging economies. The Hamburg harbor logistics firm HHLAA noticed an increase in container freight traffic of 20 percent over the period, due to the rise in exports.

One reason German manufacturers are winning export sales could be that the euro is being kept low by concerns about weaker Mediterranean partners.

"It remains to be seen if the buoyancy of the eurozone core spills over to the periphery, or whether the periphery drags the core down," said Chris Williamson of the London-based economics group Markit. 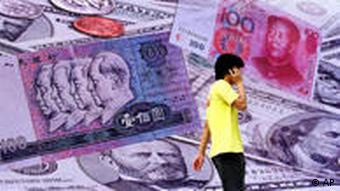 Emerging economies such as China have fuelled the growth

The increase in German growth boosted the figures for Europe as a whole, with a one percent rise across both the 16-member eurozone and the 27-member EU. Those results, in both cases, represent the steepest growth in four years despite limited signs of recovery in some parts of the continent.

First-quarter figures were also revised, up from 0.2 percent to 0.5 percent. The global economic downturn saw Germany's GDP fall by 4.9 percent in 2009.

Spain announced a 0.2 percent growth in the second quarter, to underline its timid emergence from recession.

The combined economy of the European Union grew in the third quarter of 2009. However, it was the first growth in five quarters, and the economies of Spain and Britain continued to shrink. (13.11.2009)