Germany's economy shrank by 2.1 percent in the fourth quarter, as the recession continued to deepen in Europe's biggest economy. It was the worst quarterly contraction since reunification in 1990. 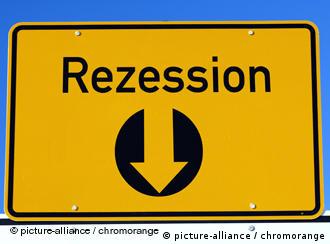 Fourth-quarter figures were worse than predicted

Feeling the impact of the global financial crisis Germany's economy contracted severely in the final quarter of 2008 from the third quarter.

The Federal Statistics Office in Wiesbaden said the 2.1 percent gross domestic product drop was the largest for any quarter since German reunification dealt a blow to the economy in 1990. And it was higher than the estimate given in January for the quarter, of a 1.5 to 2 percent GDP decline.

The quarterly progression during 2008 underscored the ongoing slippage of Germany's economy into recession. 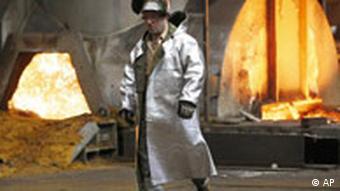 The steel industry has been hard hit

The first quarter showed a 1.5 per cent rise over the final quarter of 2007, but then the GDP declined by 0.5 percent each in the second and third quarters, before finishing with the 2.1 per cent plunge in the last three months.

The statistics office cited shrinking exports and capital investment as key factors in the decline.

The government forecast last month that the country's economy will shrink by 2.25 percent in 2009, which would be its worst performance since World War II.

One of the hardest-hit German sectors is steel. On Friday, Feb. 13, German steelmaker ThyssenKrupp reported a 59 percent drop in profit in the fiscal first quarter.

The Dusseldorf-based company said it will cut jobs in its steel division as a result of falling world wide demand.

With orders for German machinery falling, an industry group warned that as many as 25,000 workers in the sector lose their jobs. (10.02.2009)

Germany, France and the Czech presidency of the European Union are calling for EU leaders to hold talks the end of February to coordinate the bloc's response to the economic crisis. (09.02.2009)

Germany has pledged to drastically cut new public borrowing by the year 2020, the joint heads of a two-year federal commission announced Friday. (06.02.2009)