German doctors have begun nationwide protests against long working hours and pay cuts. On Monday, 1,400 doctors took to the streets in two states to kick off the weeklong action. 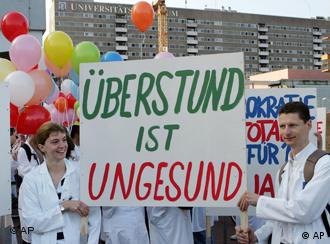 The pain threshold for young doctors in German hospitals has been reached. On Monday in the states of Baden-Württemberg and Hesse, over 1,400 physicians hung up their stethoscopes on the office door and hit the streets to protest poor working conditions.

The banners the doctors carried sent a clear signal to hospitals, particularly state-run facilities, around the country: "Better Pay for Better Work" and "England Pays Twice as Much."

On the first day of weeklong protests that will culminate on Friday in Berlin with a "national day of protest," leaders from the Marburger Bund doctors' union are looking to raise the awareness of the plight of German doctors compared to their peers abroad. 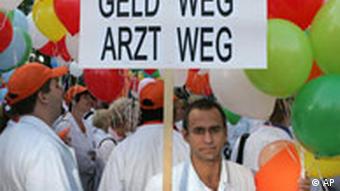 Physicians of Frankfurt's University hospital protest against their working conditions. The banner reads "Money away, doctor away."

In a country where many laborers receive extra compensation for working overtime, at night or under dangerous conditions, the doctors seem to have a point. The Marburger Bund said that some 146,000 hospital doctors perform 50 million hours of overtime each year, most of them without extra compensation, and that Germany trailed far behind comparable nations in physicians' salaries.

The chairman of the union, Frank Ulrich Montgomery, said the budget cuts at university clinics were equal to "state-supported robbery of wages." The doctors say they have been forced to bear the brunt of budget cutbacks at public health institutions, seeing their Christmas and vacation bonuses slashed while working hours increase.

"As long as French, British and American colleagues earn two or three times as much, nothing will stop the flight of doctors abroad and the shortage of physicians," said Montgomery.

Particularly disturbing to the union was the grave discrepancy between young assistant doctors and head physicians.

27-year-olds fresh out of college begin with a take-home pay of around 2,500 euros ($3,000) per month. Their superiors, frequently with managerial duties, earn up to 12 times that amount.

The system is at fault 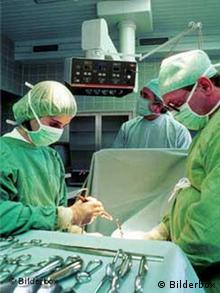 While the younger physicians have taken to the streets demanding fairer work schedules and more pay, others say it is the system that doctors created for themselves that is at fault.

"The union leaders can't come up with a better idea than to demand more pay," criticized Kurt Lauterbach. The health care economist points out that the two-tier health care system, where little money can be earned with public health plan patients and a lot with private patients, leads to young doctors receiving poor wages.

"This system is unjust and must be revamped," Lauterbach declared.

This must also be done in the interest of German patients. Young doctors are taking their abilities to other countries where they know the rewards are greater. According to the latest figures from the doctors' union, around 6,000 positions remain unfilled at German hospitals. The same number are registered abroad.

One area where all parties concerned agree, is the amount of time that German physicians spend mired in medical bureaucratic procedures. According to Christian Democratic social affairs expert Andreas Strom, this costs them up to 30 percent of their work time.

Germany's health system is a troubled soul. The winces of pain elicited by the financial incision of reform may be beginning to fade, but the laments of young doctors are growing louder and many are leaving for Britain. (May 10, 2005)

German doctors have voiced concern about the health of their own profession during a four-day national congress in Berlin, responding to widespread protests over low pay and untenable working conditions. (May 4, 2005)

Uninsured in Germany: A Growing Trend

In Germany, more and more people are opting to leave the state-run health insurance plans. But those who do so are taking on the risk of going bankrupt paying for medical treatment. (Oct. 5, 2004)