The German discount supermarket chain Lidl has fired the head of its domestic food operations amid accusations of spying and data abuse. 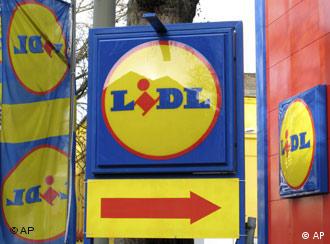 Discounter Lidl takes a sharp turn to save face

The German-based discount chain Lidl has fired the head of its German operations after the firm was found to be spying on its employees and gathering information about their health.

Frank-Michael Mros was relieved of his duties with immediate effect, a company statement said on Monday. Mros will be replaced by Juergen Kisseberth, a long-time Lidl insider.

Documents found recently in a dumpster in the Ruhr industrial region indicated that the company had violated data protection laws by compiling information of a private nature on staff members in 2008 and 2009.

Comments like "operated on for a tumor" or "wants to get pregnant" were noted in files titled "state of health." It is not known if these practices were conducted across the entire Lidl organization.

The supermarket chain, which employs some 53,000 people in Germany alone and has nearly 4,000 stores in almost every European country as well as Canada and the United States, was rocked last year by a scandal after it hired private detectives to watch employees with hidden cameras. Lidl was found guilty in that affair and fined 1.5 million euros ($2 million).

Due to the latest revelations, trade unions representing Lidl employees have called for a criminal investigation and legal consequences. Werner Wild, a spokesman for the Ver.di union, said Lidl appeared to have a disturbed relationship with the rule of law.

Report: Spying on Employees Not Limited to Retail Sector

Discounter Lidl is not the only business to spy on its employees. It's happening at companies all over Germany. (16.04.2008)

The Germany-based Lidl supermarket chain is known throughout Europe and elsewhere for its cut-rate groceries, household goods. But they've broadened their focus to the realm of cars. (15.03.2009)