German Defense Minister Slams US Ground Strike in Pakistan | Germany | News and in-depth reporting from Berlin and beyond | DW | 05.09.2008

During a visit to Pakistan Friday, German Defense Minister Jung slammed US ground strikes in the country that killed civilians but said Islamabad needed to do more to curb militants operating near the Afghanistan border. 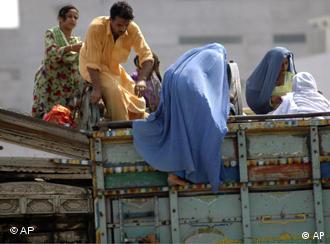 On a visit to Islamabad on the eve of Pakistani presidential elections, German Defense Minister Franz Josef Jung called on the US to stop attacks on extremists in the country, saying it was important Pakistan assumes responsibility for fighting terrorism on its soil.

The US attack took place on Wednesday this week in Pakistan's South Waziristan tribal region. It killed at least 20 people including women and children, Pakistani officials say, and was the first known foreign ground assault in Pakistan against a Taliban haven since US forces invaded Afghanistan in 2001.

Pakistan has strongly condemned the US raid and this week the government in Islamabad summoned the US ambassador to protest the unusually bold raid.

The raid appeared to indicate that the United States was forging ahead with a tougher strategy to curb the growing numbers of Taliban fighters crossing from Pakistan to attack American and NATO soldiers fighting in Afghanistan. 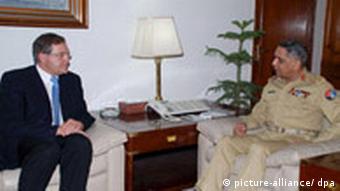 The German defense minister who travelled to Islamabad on Friday discussed security in the lawless tribal areas with his Pakistani counterpart Ahmad Muktar.

US and Afghan officials say Pakistan's remote and mountainous tribal region bordering Afghanistan has become a harbor for al-Qaeda and Taliban militants to stage attacks since the fall of the Taliban regime at the end of 2001.

The deteriorating security situation in the rugged and increasingly porous border region has led to a rise in attacks against NATO forces in Afghanistan recently.

Top American military commanders have warned Pakistan that they would start attacking Taliban havens inside Pakistan’s tribal areas if the increased infiltration by Taliban fighters into Afghanistan did not stop.

Jung's meeting with Muktar stressed the need for closer collaboration between Western forces and Pakistan in the border region.

The Pakistani minister assured Jung his country was deeply committed to the fight against terrorism. Muktar said Pakistan has committed 100,000 soldiers to patrol the volatile border region, but that the coalition forces needed to respect Pakistan's sovereignty and avoid killing innocent civilians in the partnership against terror.

Reputation of international troops at risk

Jung had been in Afghanistan earlier in the week on an unannounced visit to support German troops anxious about the increasing risk of Taliban attacks.

Tension has been high among the German contingent amid an upsurge of attacks from booby traps and ambushes. Last week a German soldier was killed when a remote-controlled bomb went off near an armoured vehicle. 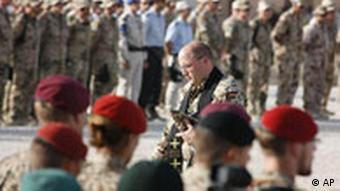 A service for the German soldier killed in Afghanistan last week

German troops were also responsible for civilian deaths last week when three Afghans were killed after both German and Afghan troops opened fire on a vehicle that had failed to stop at a checkpoint even after warning shots had been fired.

The German army has paid compensation to relatives of a woman and two children shot dead last week at a checkpoint manned by its soldiers in northern Afghanistan, German daily newspaper Die Welt reported this week.

A defence ministry spokesperson confirmed the report this week saying Defence Minister Jung had arranged the compensation during the visit to Afghanistan to pay his respects to the relatives.

It was one of a recent string of incidents that experts say are damaging the reputation of the almost 70,000 international troops as well as the Afghan government, which need the backing of the local population if they want to beat a Taliban-led insurgency.

Even though most German soldiers that are part of the NATO-led international force in are stationed in the relatively calm north, 26 troops have died in Afghanistan since the start of the mission in 2002.

Afghan President Hamid Karzai has said relations with international forces backing his government have been frayed because of the killing of more than 90 civilians during a recent strike by US-led coalition troops. (04.09.2008)

In an interview with DW-WORLD.DE, Dr. Christian Wagner, head of Asia Research at the German Institute for International and Security Affairs, says that the relationship between Germany and Pakistan can only get better. (19.08.2008)

Pakistani President Pervez Musharraf stepped down in the face of intense political pressure. His legacy is likely to be better than expected, argues DW's Thomas Baerthlein. But there is still much to be achieved. (19.08.2008)