In its recent ruling, Germany's constitutional court upheld a 2009 law allowing plea bargains in criminal trials. The court also used the occasion to remind judges and prosecutors to play by the rules. 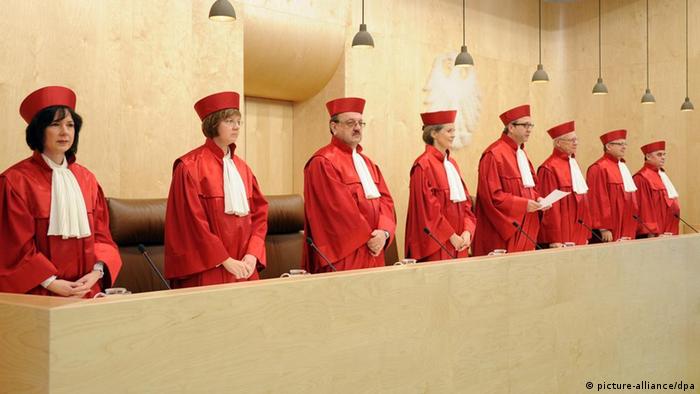 In upholding a 2009 law passed by Germany's parliament, the judges used the occasion to stress the importance of that law's central tenets - namely that plea bargaining adhere to principles of "justice" and "legality."

The court simultaneously ruled that in the cases of three men who had entered into plea bargains during criminal trials, those principles of "justice" and "legality" had not been upheld.

The plea bargaining process in general, judges criticized, had de facto strayed from the 2009 law "in considerable scope." The 2009 law provided a strict legal framework within which plea bargains were supposed to be undertaken.

Prior to the ruling, critics had accused judges and prosecutors of using plea bargains as a means of speeding up backlogged criminal trials. Critics also claimed that, as result of those plea bargains, judges and prosecutors were unfairly affecting the "presumption of innocence" and were neglecting to ensure that evidence necessary to a fair understanding of the trial was heard in court.

As a result of the court's decision, the previous judgments against the three men whose plea bargains were under question during the constitutional court's hearings were rendered void.

Those men will have their cases heard once again in criminal courts in Germany.

Court to decide on courtroom deals

Critics say that courtroom deals offering light punishment for quick confessions hinder courts in their task of finding out the truth of a case. The German constitutional court is to rule on the matter. (18.03.2013)

Hungary's parliament has disempowered the constitutional court by approving controversial constitutional changes, despite massive protest at home and abroad. Many view the changes as an attack on civil rights. (12.03.2013)

Three members of the Russian female protest band Pussy Riot were found guilty of hooliganism for their infamous punk "prayer." One has been given a suspended sentence – but now faces accusations of betrayal. (11.03.2013)