German court rules in favor of passive assisted suicide | Germany| News and in-depth reporting from Berlin and beyond | DW | 25.06.2010

Germany's Federal Court of Justice has ruled that assisted suicide is legal in certain cases. The ruling is based on a case involving a terminally-ill coma patient whose daughter attempted to cut her feeding tube. 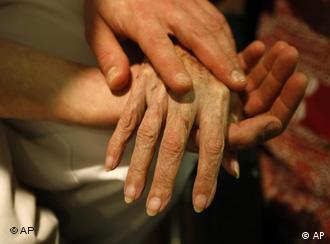 Experts say legislation on assisted suicide in Germany is unclear

Germany's highest criminal court has ruled that passive assisted suicide is legal if the patient has explicitly decreed his or her wish that treatment used to keep the patient alive should be terminated.

"Turning off a ventilator or cutting a feeding tube fall under the category of permissable forms of terminating treatment," judge Ruth Rissing van Saan said.

The ruling by the Federal Court of Justice refers to a case involving Erika Kuellmer, a then terminally-ill patient in her seventies, who had been in a coma for five years. Prior to becoming unconscious, she indicated to her daughter that she would not want to be kept alive should she fall into a coma.

On the advice of her solicitor Wolfgang Putz, who specializes in medical law, the daughter tried to help her die by cutting the tube that was feeding her mother. But staff at the care home intervened and the patient survived another two weeks before dying a natural death.

Putz, who was convicted of voluntary manslaughter by a court in Fulda last year, has now been acquitted.

The law on passive assisted suicide was previously unclear or, at least, difficult to interpret. In 1994, the Federal Court ruled that if the patient has given his or her putative consent, treatment can be terminated. This was the legal basis for Putz in Kuellmer's case. But, until now, it was unclear when terminating treatment would be considered a criminal offense.

Passive assisted suicide is also legal if the process of dying has irreversibly begun. But with modern medicine capable of keeping patients alive artificially, it is often tricky to determine when that process has set in.

In 2005, the Federal Court ruled that no care home or similar institution has the right to force a patient to be fed through a tube against their will. In addition, new legislation was introduced last year that states that the patient's wishes have to be considered at all times until death.

Active assisted suicide remains illegal in Germany. Killing someone by injection or other means, even if the patient consents, is punishable by up to five years in prison.

A rise in the number of foreigners seeking to end their lives in Switzerland, and a study showing that more and more people seeking assisted suicides do not suffer from a terminal illness, have provoked heated debate. (29.10.2009)