Germany has cut its greenhouse gas emissions to below levels required under the Kyoto Protocol on climate change, the government in Berlin announced on Friday. 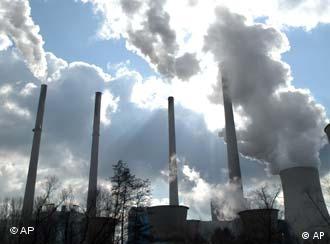 Europe's biggest economy's CO2 emissions, which are blamed for causing global warming, last year came in at 22.4 percent below Kyoto's base years of 1990 and 1995, the environment ministry said in a statement.

The release of the figures comes ahead of Monday's crucial United Nations-sponsored talks on climate change in the Polish city of Poznan. Climate change is also on the agenda for next month's European Union (EU) leaders' summit in Brussels.

German Environment Minister Sigmar Gabriel seized on Friday's data as a sign of the success of Berlin's climate change policy. But he warned that continuing on the path to lowering CO2

"Kyoto is only a first small step," he said. "In order to be able to counter climate change we have to make big steps forward. We still need more efficiency and lower electricity use."

Gabriel said this is the reason that Germany has been calling for an EU climate change package with ambitious targets.

The European Union's richest members must make concessions to their poorer peers if the bloc is to agree to a landmark deal on fighting climate change, a Polish minister insisted Thursday. (27.11.2008)

Just ahead of a major UN summit on climate change in Poland, EU states are struggling to agree on their approach. The host country isn't the only member state that finds it hard to stick to earlier agreements. (27.11.2008)

A sustainable energy supply can be achieved, even under conditions of world-wide economic downturn and without lights going out -- this is the outcome of a recent global energy report. (25.11.2008)