German Calls to Ban Controversial Turkish Movie on Iraq | Germany | News and in-depth reporting from Berlin and beyond | DW | 20.02.2006

German political leaders and Jewish community representatives have demanded the boycott of a hit Turkish action movie that casts US soldiers in Iraq as villains. 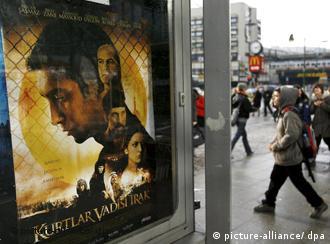 At least 200,000 people in Germany have already seen the film

Bavarian Premier Edmund Stoiber and the Central Council of Jews blasted "Valley of the Wolves -- Iraq" (Kurtlar Vadisi -- Irak) as anti-American and anti-Semitic and called on German cinemas to stop showing the picture.

"This irresponsible film does not encourage integration but sows hate and mistrust against the West," Stoiber told the Bild am Sonntag newspaper in a reference to the film's popularity among Germany's large Turkish immigrant community.

"I urge the cinema owners in Germany to pull this racist and anti-Western hate film immediately," he said, adding that "EU candidate Turkey should take a clear stand."

The film has so far sold 200,000 tickets and is ranked fifth in the German box office charts.

Film based on actual event

It is based on an actual event -- the arrest of 11 Turkish soldiers by a US military unit in northern Iraq in July 2003 on grounds of "suspicious activity." The men were held for two days, their heads bagged, before being released without explanation.

The incident dealt a severe and lasting blow to relations between Turkey and the United States, long-time NATO allies.

"The Turks want to see this film to a certain extent because it's a kind of repayment on the screen for the ignominy that all Muslims -- whether they are believers or not -- perceive in Iraq," said acclaimed Turkish-German writer Feridun Zaimoglu. 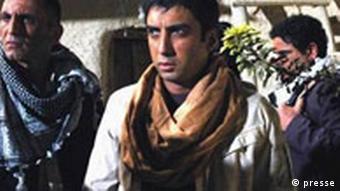 The film features a "Rambo"-like Turkish intelligence officer who exacts revenge for the episode, and depicts sadistic violence against innocent Iraqi civilians at the hands of the US troops.

The GIs are also seen running a trade in organs extracted from prisoners at Baghdad's notorious Abu Ghraib prison under the guidance of a Jewish US military doctor for rich buyers in New York, London and Tel Aviv.

"Valley of the Wolves" is an adaptation of a popular Turkish television series and the most expensive Turkish feature film to date with a $ 10 million (8.4 million euro) budget. It has become a blockbuster in Turkey since its release this month.

"It is an extraordinary film that will go down in history," exulted Bülent Arinc, president of the Turkish National Assembly, speaking to the Anatolia news agency after attending the movie's gala along with Prime Minister Recep Tayyip Erdogan's wife, Emine, who was equally impressed by the film.

Many Turkish movie goers told AFP news that the film is not an accumulation of anti-American cliches. 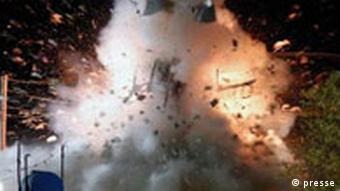 In the movie, a minaret explodes after a US attack

"No, no, it is not an exaggeration at all," said a 29-year-old computer engineer who identified himself only by his first name, Salih. "The news is full of hundreds of Iraqis being killed every day -- there's none of that in the movie. It presents the situation as it is, with the Americans who want to seize all power in the region."

"There is a bit of fiction," conceded 28-year-old soldier Alperen, who also withheld his surname, "but it's very close to reality."

A US diplomat meanwhile brushed aside the film's significance, arguing relations between Turkey and the US were returning to normal.

"It is entertainment," he told Reuters news service. "It does not purport to be a factual version of events."

The last-ditch deal between the EU and Turkey on the latter's membership bid has triggered relief among the bloc's negotiators and joy in Turkey, but deep skepticism still persists in conservative camps. (Oct. 4, 2005)

Germany's Day of Unification, Oct. 3, celebrates togetherness and solidarity. This year, however, it also marks the beginning of EU accession talks with Turkey, an issue that has had a divisive effect on German society. (Sept. 28, 2005)