After years of declining birth rates, Germans are having more babies. The trend was reversed in 2007 and continued in 2008, Family Minister Ursula von der Leyen confirmed in a newspaper interview on Sunday, Feb. 15. 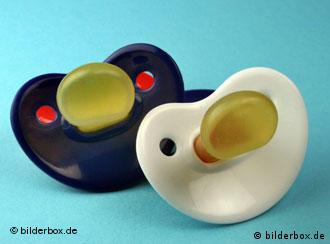 Babies are back in vogue in Germany

The family minister, who will present a report on families on Monday, said the rise in the number of children was especially pronounced in women between 30 and 40 years of age. Men are also expressing their desire to have more kids, she told the Bild am Sonntag newspaper.

After years of declining birth rates, the country reached a low in 2006, with 673,000 births. That was 27 percent lower than in 1946, when Germany was just emerging from the devastation of World War Two. 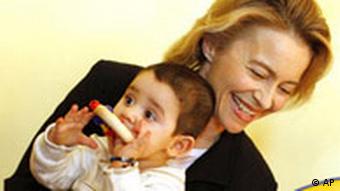 Von der Leyen said the reason behind the continuing rise in birth rates was a change in mentality.

"Young people have the feeling that the society will not simply leave them behind as parents," she said.

Von der Leyen, herself a mother of seven, introduced a parental leave reform in 2007 which included new benefits for German fathers allowing them to stay at home for a time with their children. The minister said her goal had been to lower the hurdles couples felt about having children.

According to surveys, 56 percent of stay-at-home mothers would like to work.

"But not at any price," said von der Leyen. "They want good child care and part-time work. We have to meet these mothers halfway."

One survey carried out by the report found that 50 percent of those asked said the family policies of the current government had improved the situation for families. Around one-third said the situation had not changed.

The EU Commission would like to make it easier for new mothers to return to the workplace by providing longer and better paid maternity leave. But Brussels' plans have met with criticism in Germany. (19.11.2008)

The birth rate in Germany rose in 2007 for the first time in three years, according to new statistics. Some attribute the minor increase to financial bonuses for children introduced last year. (20.08.2008)

German Couple Fail in Fight to Overturn Ban on Incest

Germany's Constitutional Court decided Thursday, March 13, against striking incest off the German penal code, ruling against a bid brought by a man who fathered four children with his sister. (13.03.2008)