German Biker Gang Members Get Life for Murder of Rival | Germany | News and in-depth reporting from Berlin and beyond | DW | 11.06.2008

A German court sentenced two members of the Bandidos biker gang to life in prison for the murder of a member of the rival Hell's Angels as 450 leather-clad bikers roared into the city of Muenster for the trial. 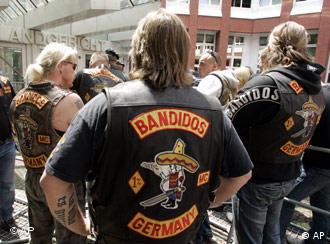 Bandidos members outside the courtroom where the trial was held

The court in the northern city of Muenster found the men, aged 36 and 48, guilty of the cold-blooded shooting of the 47-year-old motorcycle dealer from the town of Ibbenbueren in May last year.

Some 400 members of the Hell's Angels and 50 of the Bandidos were present in Muenster for the final day of the trial. A strong police presence kept the two groups apart.

Biker gangs including the Bandidos and the Hell's Angels, both of which have charters all over the world, have been involved in bloody feuds in recent years and are believed to be highly active in organized crime.

Last month, the Interior Ministry in the southern state of Bavaria warned the Hel's Angels were extending their sphere of influence into southern Germany.

The motorcycle group, which has been linked to organized crime in many countries, has long been established in northern Europe.

The Hell's Angels have in the past been linked to dealing in illegal drugs and arms and to prostitution, protection rackets and money-laundering.

The ministry said southern Germany was of increasing interest to the gang because of drug routes running through south-eastern Europe and the Balkans.

In December, Dutch prosecutors failed in their efforts to have the Hell's Angels declared a criminal association after an Amsterdam court ruled that confidential conversations between members and their lawyers had been bugged illegally.

Trafficking and forced prostitution are on the rise, and the EU countries' complicated prostitution laws make prosecution difficult. An aid organization has opened its 12th office in Germany to advise women in need. (28.04.2008)