German automobile club takes a critical look at Greek ferries | Europe| News and current affairs from around the continent | DW | 31.07.2009

In an examination of Greek ferries undertaken by German automobile club ADAC, nearly a third of the 14 ferries were judged to be "poor" or "very poor." 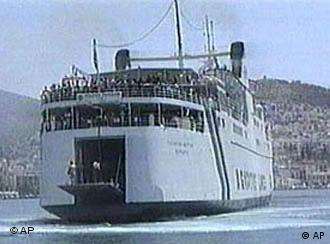 The list of alleged safety problems ran the gamut from defective lifeboats to bad fire hydrants and one of the ferries was missing a required bulkhead on the auto deck.

In one test of fire fighting equipment, a fire hose could only produce a small trickle of water from the hose.

The ferry that got the highest marks for the ADAC test was the "Ionian King" of the shipping company Agoudimos Lines, which sails between Patras in the Peloponese Islands and Igoumenitsa on the Greek mainland. The 18-year-old ferry was rated "good" in four out of five categories. It also said that the crew was "very well-trained and responsible."

The ferry that got the worst safety review was the "Sardinia Vera." The 34-year old ferry sails between Piraeus on the Greek mainland and Vathi on the island of Samos. ADAC said the safety readiness of the crew was worrying. It also said that the ship was missing the required bulkheads to prevent water from coming into the car deck.

The ADAC tests were conducted by undercover testers in May and early June by independent nautical experts.

Only five of the 14 ferries' tested were judged to be "good" and merely one even was judged "very good."

ADAC called the results of the safety inspections "disappointing and alarming."

The investigation comes nine years after the Greek ferry "Express Samina" hit a reef and sunk off the island of Paros, killing 80 people.