Thomas Reiter, a former German air force pilot and veteran astronaut, joins six Americans on the Discovery shuttle mission to the International Space Station. Listen hard -- he'll even be playing his guitar up there. 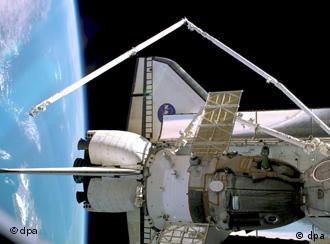 The countdown has begun. If everything goes as planned, German astronaut Thomas Reiter will be launched into space in the Discovery shuttle from Cape Canaveral, Florida on Saturday at 9:49 p.m local time.

The 48-year old astronaut from Frankfurt is representing the European Space Agency (ESA) as the only non-American in the seven-person crew. Until now, only Americans and Russians have participated in long term missions to the International Space Station (ISS), the destination of this Discovery mission.

"The view of the Earth is something that stays with you for the rest of your life," Reiter recently told reporters.

A veteran astronaut, Reiter has seen that "little blue marble" from space several times before. From September 1995 to February 1996, he spent 179 days aboard Russia's now-defunct Mir Space Station. He has also performed two space walks. 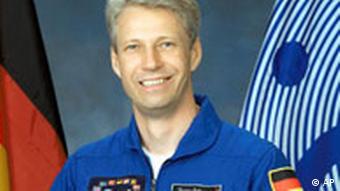 Formerly a German air force pilot, Reiter became an ESA astronaut in 1992. He also participated in the ESA studies of the Hermes manned space vehicle and in the development of equipment for the Columbus module, one of Europe's major contributions to the ISS.

Reiter's job during the several-month mission will be to transfer cargo from the Discovery space shuttle to the ISS.

Construction of the ISS was first begun in 1998 and is an ongoing project. The five men and two women involved in Saturday's 115th shuttle mission will be responsible for unloading two tons of food onto the space station.

When Reiter arrives at the ISS, he will meet American astronaut Jeffrey Williams and Russian cosmonaut Pavel Vinogradov, who are currently on board the space station.

The Discovery mission is only the second since the Columbia shuttle accident in February 2003, when all seven astronauts on board were killed. A mere 700 grams of foam on the outer tank caused the tragedy when it caught fire during re-entry into the atmosphere.

Preparations for Saturday's launch have gone smoothly and given no cause for worry. However, there is a 60 percent chance that the launch will have to be postponed due to weather conditions, a NASA meteorologist told news agency AFP. If poor weather persists, it is possible to postpone the launch for up to 19 days.

Reiter will be leaving his wife and two sons on Earth during his space station stay, but is bringing along some pictures, a computer disk with classical and rock music, and guitar strings. There is already a guitar in the ISS that he'll be able to play.

For about a decade, Venus has been virtually ignored. But the European Space Agency wants to change that, and has successfully sent the Venus Express into orbit around the second planet from the sun. (April 11, 2006)

The European Space Agency announced Tuesday that it had just completed construction of the Columbus laboratory, which will allow researchers to perform an array of experiments on the International Space Station (ISS). (May 2, 2006)

The European Space Agency and Galileo Industries have formally signed a contract to develop the ambitious navigation system. Europe hopes it will rival the reigning US GPS network. (Jan. 20, 2006)