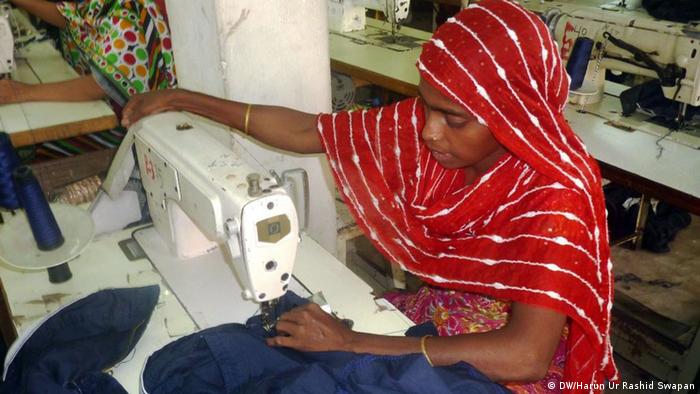 Garment workers upset over meager pay and safety flaws clashed heavily with police in the capitals of Bangladesh and Cambodia on Tuesday. Factory owners are under trade union pressure to raise wages.

In Cambodia's capital riot police stopped more than a thousand workers from a Singapore-owned factory, who were trying to march toward the home of Prime Minister Hun Sen.

A woman roadside vendor was shot dead and as many as 20 protestors were wounded by police gunfire, according to the local rights group Licadho and relatives quoted by the news agency AFP.

"Why did police use live ammunition to crack down on them?," he asked, adding that Buddhist monks were among those harmed by tear gas.

Local Bangladesh media said scores of people were injured when police fired rubber bullets and tear gas as 40,000 workers protesting for a second day in the Ashulia export zone on the outskirts of Dhaka.

The protest prompted at least 200 factories in the zone to suspend production.

Last month, Bangladesh's Minimum Wage Board approved the lifting of minimum monthly wage from 3,000 taka ($38) to 5,300 taka ($67). But, manufacturers have urged the government to block implementation. The workers want $100.

The government had pledged to raise wages by November based on the recommendation from the board which comprised industry, union and government representatives.

Working conditions in Cambodia were criticized in July by the International Labor Organization (ILO), which cited fire safety deficiencies and the use of child labor. In May, the ceiling of a footwear factory collapsed, killing two people.

A typical wage in Cambodia's garment industry which employs about 650,000 workers, is about $110 a month with overtime.

Prime Minister Hun Sen said the protests could prompt garment firms to relocated to Myanmar, Laos and India, where labor is cheaper.

Bangladesh has about 4 million textile workers, mainly women, producing clothing for retail customers in Europe and the United States.