G4 Knocks on Security Council Doors Again | News and current affairs from Germany and around the world | DW | 16.09.2005

Along with Japan, Brazil and India, German Foreign Minister Fischer on Thursday renewed calls for permanent Security Council membership, on the sidelines of the UN world summit in New York. 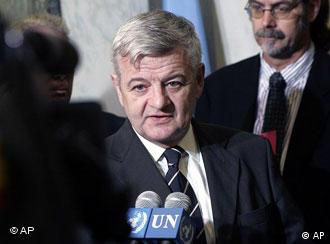 Speaking at the UN, Fischer said the door is still open for reform

During a one-day visit to the ongoing UN summit in New York, German Foreign Minister Joschka Fischer on Thursday reaffirmed his country's ambitions to get a permanent seat at a reformed and enlarged UN Security Council.

Speaking at the UN General Assembly, Fischer stressed that unsuccessful negotiations so far about expanding the Security Council should be reopened. He added that he was hopeful that a watered-down plan adopted by the General Assembly to restructure the world body still "leaves the door open" for further progress.

"We will continue to work patiently on reform," the minister told German reporters.

Fischer quashed rumors that reform of the UN's highest-ranking body had been put on hold, saying that "the pressure of relationships makes this reform necessary."

He underlined that the German government was not primarily concerned about getting permanent membership, but rather wanted to bestow more legitimacy on the world body by ensuring that it no longer reflected the world of 1945 but rather that of the 21st century.

Opposition from US and China 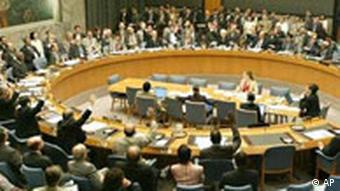 The UN Security Council has five permanent members -- the US, Russia, China, France and Great Britain. The remaining ten members are elected for a period of two years.

Germany has launched a joint bid along with Japan, India and Brazil for permanent membership. The group known as "G4" agreed Thursday on the sidelines of the UN summit to continue to pursue efforts towards that end.

The G4 had submitted a plan to boost the council's membership from its current 15 to 25, with six new permanent seats and four new non-permanent seats.

Their first bid ran into opposition from the United States and China and failed to get crucial support from Africa for the necessary two-thirds of member countries' votes in the UN General Assembly to change the world body's charter.

Fischer's appeal to reform and expand the Security Council was lent support by the remaining G4 members on Thursday, many of whom appeared optimistic about their chances.

"The G4 exists. The G4 will continue to work for United Nations reform," Indian Foreign Minister Natwar Singh said. Singh added that their proposal could be reintroduced at the 60th session of the UN General Assembly with some changes.

"We are confident that it (reform) will happen," said Brazilian Foreign Minister Celso Amorim.

Japan in particular, made a strong case for the Security Council to be more inclusive and meet the challenges of a changing world. 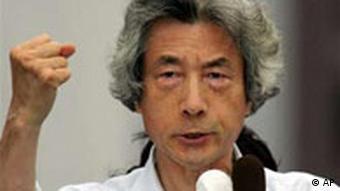 In a speech to the UN world summit, Japanese Prime Minister Junichiro Koizumi, fresh off a thumping election victory at home, pleaded the case for change on the Security Council.

"The world has changed dramatically over the last 60 years. Asia and Africa, once under the shackles of colonialism, are now significant players in our global community," Koizumi told other leaders.

"For the last 60 years, Japan has determinedly pursued a course of development as a peace-loving nation, making a unique and significant contribution to the peace and prosperity of the world," he said.

"The composition of the Security Council must reflect these fundamental changes. Japan is convinced that Security Council reform is a just cause for the international community -- as is the deletion of the long-obsolete 'enemy state' clauses from the UN Charter," Koizumi added.

Japan was one of the vanquished nations in 1945, but now has the world's second-largest economy and is the second-biggest contributor to the UN budget.

Germany has made a similar case as Europe's biggest economy. India and Brazil are emerging powerhouses in Asia and Latin America, respectively.

Many countries think UN Security Council reform is needed, but disagree on how to do it. UN chief Kofi Annan now says finding a compromise will take longer than expected. The plan pushed by Germany is likely doomed. (Aug. 13, 2005)

A far cry from the original plan put forward by Secretary General Kofi Annan, the UN's reform blueprint has been diluted beyond recognition -- according to its critics. DW's Klaus Dahmann wonders if they have a point. (Sept. 14, 2005)

The United Nations General Assembly has approved a compromised reform package that will be the basis for discussion at the UN's 60th anniversary summit starting Wednesday. (Sept. 14, 2005)