G20 ministers meet to look at global recovery, climate funding | World | Breaking news and perspectives from around the globe | DW | 06.11.2009

Finance ministers from the G20 are in Scotland fleshing out plans to firm up the global economy. But with less than a month to go before the climate meeting in Copenhagen, hopes are dim for financial consensus there. 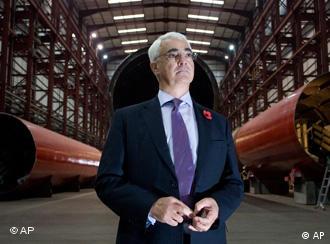 Finance ministers and central bankers from the Group of 20, the world's richest and fastest developing nations, met on Friday to begin a weekend of talks on recovery from the financial crisis and to attempt to come to a consensus before the December climate summit in Copenhagen.

British Finance Minister Alistair Darling, who is hosting the meeting in St Andrews, Scotland, told the G20 it "must push for a deal on climate financing and governance."

"The road ahead will be difficult; there are arguments still to be won. But that’s no reason to give up - rather, it’s a reason to redouble our efforts," he said.

The meeting is to be the first appearance on the international scene of Germany's new finance minister, Wolfgang Schaeuble.

First on the agenda is deciding whether or not to remove stimulus packages designed to staunch the damage caused by the economic crisis.

"I think we can reach agreement on firstly making sure we don't remove support too early because the recovery is by no means established everywhere," Darling told the Reuters news agency.

Brazil's President Luiz Inacio Lula da Silva brought up a concern that the apparent bullish trend in the global economy might derail any attempts at serious economic reforms.

"The small signs of improvement of the economy could create impediments for us to accomplish deep reforms without which humanity could have a relapse in a much more severe way (into) a new crisis," Lula said in a speech in London.

The delegates will also attempt to close large trade, consumption and budget gaps but little progress is expected due to long-standing disagreements.

The preceding two years of negotiations on the issue of climate finance will be another subject broached ahead of the Copenhagen summit beginning Dec. 7.

The ministers will be looking at how cash from rich countries to help developing nations deal with the costs of curbing greenhouse gas emissions should be delivered.

But as earlier summits and conferences have failed to bring about meaningful agreements, expectations about the Copenhagen conference are waning.

"This is a classic case, rather like world trade, where the spirit is willing but some very great heavy lifting is going to be required if we are going to make the progress we need," Darling said.

After agreeing to allow the G-20 to take over the global role once played by the G-8, international political leaders struck a preliminary deal to provide emerging nations with more influence in the IMF, too. (26.09.2009)

In spite of concerns that financial reforms would take a back-seat in Pittsburgh, US Treasury Secretary Timothy Geithner has said world leaders are close to an agreement on regulation and limiting bankers' compensation. (25.09.2009)

While the US city of Pittsburgh gets ready to welcome world leaders for high-level monetary talks, German Chancellor Angela Merkel says the summit is an important step towards closer control of financial markets. (24.09.2009)