French President Francois Hollande, speaking before a friendly crowd in the Malian capital, has said military operations in the country will be short. But he added France will stand by Mali during its rebuilding process. 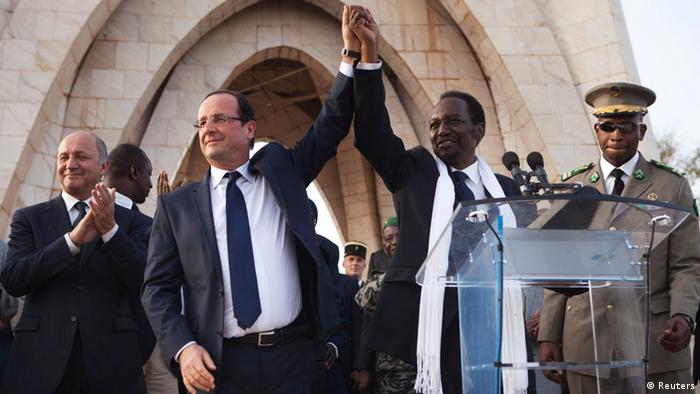 A cheering crowd met Hollande Saturday in Bamako. The French president was there to visit French troops fighting Islamist rebels in Mali's north, as well as to meet with the country's interim president, Dioncounda Traore (above right).

"You're celebrating a new kind of independence, not from colonialism but from terrorism," Hollande said to thousands of spectators at the capital's Independence Square.

"We'll stay as long as we need to, but there's no question of us getting entrenched here, this is a short operation. We'll stay by your side as you address rebuilding in your nation."

Thousands came out to welcome Hollande earlier in the day during his visit to Timbuktu, which was retaken by French and Malian forces six days ago.

"It's not over yet, it's going to take several weeks, but our goal is to pass the baton," he said. "Our African friends will be able to do the job we've been doing until now."

Traore thanked Hollande for the French troops' "efficiency," which he said had allowed the north to be freed from "barbarity and obscurantism."

Hollande said France would withdraw its troops from Mali once the country had restored sovereignty over all its national territory and a UN-backed African military force had taken over.

That force is expected to number more than 8,000, but its deployment has suffered repeated setbacks, including shortages of kit and airlift capacity and questions about who will fund its estimated $1 billion (732,000 euros) cost.

The US and the European Union have backed France's military campaign in Mali, saying the Islamist militants there could use the north of the country as a launch pad for international attacks.

Rights groups have reported summary executions by both the Malian army and the Islamists during the fighting. Human Rights Watch said Friday that Malian troops had shot at least 13 suspected Islamist supporters in Sevare and dumped them into wells, but the Malian army denied any crimes by its forces.

Some 377,000 people have fled their homes during the crisis, including 150,000 who have sought refuge across Mali's borders, according to the United Nations.

France's military campaign has been met with little resistance, with many Islamists believed to have retreated into the desert hills around Kidal.

Hollande called on all troops in Mali to show "exemplary" conduct and respect human rights, an appeal reiterated by Traore.

"Don't let yourself give in to excess, to vengeance, in the euphoria of your new-won freedom. I know I can count on you not to commit any abuses, not to settle scores," Traore told the crowd in Bamako.

A car bomb hit a convoy in the Mopti region before being followed by a hail of bullets. Islamic extremists are believed to behind the attack.