French and Malian troops have clashed with Islamist militants in the once-liberated town of Gao. The announcement comes one day after France’s defense minister said forces have killed hundreds of militants. 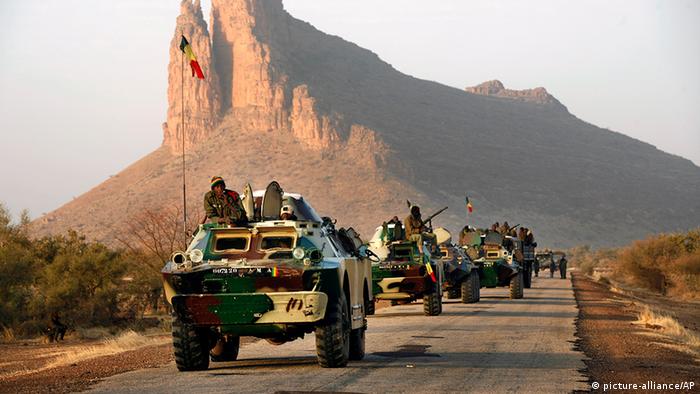 French Defense Minister Jean-Yves Le Drian confirmed via Europe 1 radio Wednesday, that troops had clashed Tuesday with Islamist militants near the northern city of Gao and vowed that forces troops would pursue them.

"There were clashes yesterday around Gao," he said. "Once our troops, supported by Malian forces, started patrols around the towns that we have taken, they met residual jihadist groups who are still fighting."

"We will go after them," Le Drian said. "We are securing the towns we have been able to take along with the Malian forces. The jihadists around Gao were using rockets yesterday."

The fighting in Gao comes one day after Le Drian said French-led forces had killed several hundred militants through airstrikes and direct combat since the military intervention in Mali began on January 11.

When asked about the comment on Wednesday, he said, "This is a real war with significant losses but I'm not going to get into an accounting exercise."

France's sole fatality has been a helicopter pilot killed at the start of the military operation. Mali announced that 11 of its troops were killed after the battle at Konna last month but has not since released a new death toll.

"France has no intention of remaining in Mali for the long term," Fabius said. "It is up to the Africans and to the Malians themselves to guarantee the country's security, territorial integrity and sovereignty."

Most recently, forces including some 1,800 Chadian troops have secured the town of Kidal, after driving out al Qaeda-linked militants, the French defense ministry announced.

The rebels have retreated to the Adrar des Ifoghas massif around Kidal, a mountain landscape pockmarked with caves. They are believed to be holding several French hostages.

The MNLA, which was originally aligned with the militants until a falling out, claimed it was working with France against "terrorists" in the region. On Sunday, the group said it arrested two top militant leaders, Mohamed Moussa Ag Mohamed and Oumeini Ould Baba Akhmed.

Le Drian said France had "functional relations" with the group in Kidal but cooperating with them to fight terrorists was "not our objective."