The leaders of France and Germany both called Thursday for the "moralization" of the global capitalist system, which they said needed to be re-examined by governments before the Group of 20 summit in London in April. 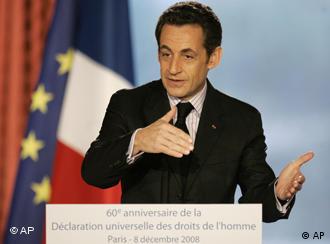 The destruction of capitalism would be catastrophic, but the system had to undergo an overhaul to stay viable, French President Nicolas Sarkozy said in Paris at the opening of the economic symposium "New World, New Capitalism," which he established as a response to the economic crisis.

He said modern-day capitalism based on speculation had been "perverted" and was "an immoral system". He said a new role should be created for governments and moral values.

"Either we re-found capitalism or we destroy it," Sarkozy said as he called for an economic system based on the value of work rather than finance.

The French leader said the structure of a new system of regulation should be agreed on before April's G20 summit in London.

Sarkozy: US dominance at an end 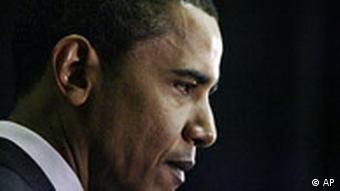 World leaders are hopeful Obama will come to the table

Sarkozy and German Chancellor Angela Merkel collectively used the summit to urge the US not to stand in the way of tighter controls on world financial markets.

"I've always in my political life been a supporter of a close alliance with the United States but let's be clear: in the 21st century, a single nation can no longer say what we must do or what we must think," Sarkozy said.

"We'll take our decisions on April 2 in London," he added. "Perhaps the United States will join us in this change. I hope so with all my heart because a new president will bring his intelligence, dynamism and his open mind and we will change the world with the United States.

Merkel said: "No country can act alone in this day and age ... even the United States, however powerful they may be." 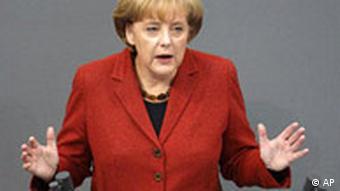 Merkel says reforms must persist after the crisis is resolved

Merkel called for the establishment of a "charter for a long-term reasonable economy" similar to the United Nations Charter.

"Our response (to the economic crisis) must be more than a few rules," Merkel said. "The crisis is an opportunity to create an international architecture of institutions."

"It is possible that alongside the (UN) Security Council, we could also have an economic council that would have a different role from ECOSOC," Merkel said, referring to the United Nations Economic and Social Council.

She singled out the US budget deficit and China's current account surplus as bones of contention and also called on politicians to remain firm even after the crisis has been resolved.

"There is a risk that when everything is functioning normally again that the financial institutions will tell politicians not to meddle," she cautioned. "We must remain determined."

Blair: No turning back 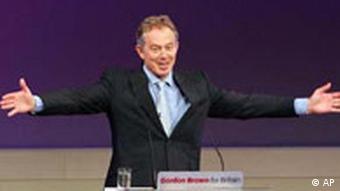 Former British prime minister Tony Blair, who is one of the co-sponsors of the symposium with Sarkozy, told participants that investment patterns must be changed.

"This economic crisis is the biggest, most complex, most delicate economic challenge of our lifetime. It is the most tricky intellectual challenge of any kind I have ever encountered and it is still evolving," Blair said.

"What is plain is that the financial system has altered in its fundamentals and can never be the same again.

"What is unavoidable in the longer term is a recasting of the system of international supervision.

"We must invest in the future," Blair said, calling for funds to be put into renewable energy, science, innovation and education.

The symposium was downgraded from a summit because few world leaders chose to attend. In addition to Sarkozy and Merkel, only Liberian President Ellen Johnson-Sirleaf was present on Thursday.

After pulling together a 400-billion-euro rescue package for the banking sector, the German government is hoping to offer the same assistance to failing businesses suffering from the financial crisis. (08.01.2009)

World Waits for Signal, Obama Keeps Own Counsel on Gaza

Incoming US President Barack Obama has said he will tackle the conflict in the Gaza Strip but only after taking office on Jan. 20. But many in the world think he should say now what he intends to do in the Middle East. (07.01.2009)