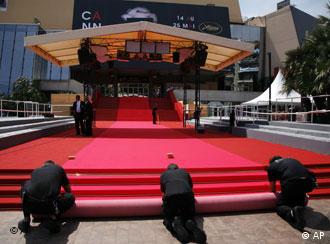 The red carpet will be rolled up until next year

A total of 22 films vied for the Palme d'Or, one of the most prestigious awards in cinema, with the win ending France's long-running drought. The last time France emerged from the festival with top honors was more than two decades ago.

The jury president, US actor and director Sean Penn, was expected to favor a social or political film, and it came as a surprise that Israeli Ari Folman's groundbreaking animated documentary "Waltz with Bashir" went unrecognized. Using innovative techniques to retell events surrounding the Sabra and Shatila massacres in 1982, the film was considered a contender for the top prize.

Penn had told a French newspaper ahead of the competition that Cannes' duty was to "do just the opposite" of the Oscars and to honor a ground-breaking, unconventional picture. 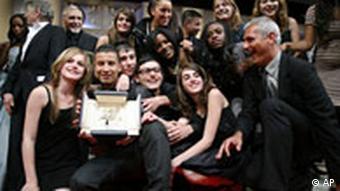 Cantet, right, accepted the award with his "class"

Screened during the final days of the competition, "The Class" ("Entre les murs") is a docu-drama with real teachers and students playing the roles in a tough French school. The young cast of joined Cantet on stage to accept the Palme d'Or, a moment the director described as deeply moving.

Based on an autobiographical novel by Francois Begaudeau, a young French teacher, Genet, turns the classroom portrayed in the movie into a microcosm of contemporary France. Begaudeau also plays the role of a dedicated but sometimes flawed teacher in the movie.

It was a subject that "interests the whole world," said Cantet at a press conference. "People have the same issues, whichever country they are in."

The film has been praised for its realistic approach and its exploration of universal issues like race, individuality and truth.

The last French film to walk away with the Palme d'Or for best film at Cannes -- in 1987 -- was Maurice Pialat's "Under the Sun of Satan," a melodrama about a 16-year-old girl who kills her lover and the priest to whom she confesses the crime. 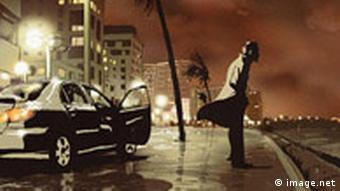 Israel's animated documentary was expected to do better

Italian directors also scored top awards at this year's Cannes festival, with the nation's two movies that were entered in the main competition both winning key prizes.

While Paolo Sorrentino was awarded the jury prize for his political satire about Italy's seven-time Prime Minister Giulio Andreotti, Matteo Garrone's powerful Mafia expose, "Gomorrah," emerged from the festival with the Grand Prix.

Garrone was applauded for his courage in looking at a touchy subject, particularly since the author of the bestselling book the film is based on has been living under police protection for the past two years.

Turkey's Nuri Bilge Ceylan won the festival's best director award for his brooding family drama "Three Monkeys" ("Uc Maymum"). In accepting the prize, Ceylan said he was dedicating the award "to my beautiful country, which I love passionately."

The nine-member festival jury acknowledged the strong presence of Latin American-themed films at this year's festival. Sandra Corveloni was awarded the best actress prize for her role in "Line of Passage" ("Linha de Passe") from Brazilian directors Walter Salles and Daniela Thomas, which tells the story of four brothers trying to follow their dreams in the Sao Paulo slums. 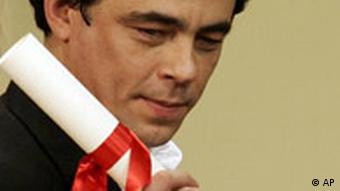 The Cannes festival award for best screenplay went to Belgian brothers Jean-Pierre and Luc Dardenne for "Lorna's Silence," which looks at immigration in modern Europe as told by a young Albanian woman who is caught up in the murky business of arranged marriages.

The festival's Camera d'Or for best first feature film, awarded to debut directors, went this year to London-born Steve McQueen's "Hunger," about a Northern Irish prisoner who died on a hunger strike.

Once again, Romania demonstrated that it has emerged as a key filmmaking nation, with Marian Crisan winning the festival's award for best short film for his movie "Megatron." Cristian Mungiu's "4 Months, 3 Weeks and 2 Days" about abortion in communist Romania won the Palme d'Or last year.

This year's festival acknowledged the long-standing contributions to cinema by French actress Catherine Deneuve, who had a film in the main competition, and veteran US director Clint Eastwood, whose "The Exchange," starring Angelina Jolie, was also in the running for the Palme d'Or.

Fatih Akin, the German cinema director who makes gritty dramas about his own Turkish minority community, won the German Film Prize on Friday for his riveting drama "Edge of Heaven." (26.04.2008)