French taxi drivers have succeeded in persuading the French government to ban rideshare apps like Uber and Lyft. A harsh new law takes effect in January. The move is good for taxi drivers, but will cost consumers money. 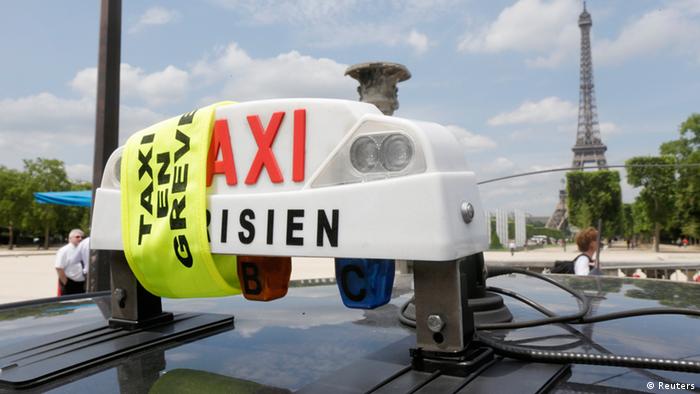 Taxi drivers staged a protest on Monday affecting Paris's two airports. A few dozen drivers converged on the airports at Roissy and Orly, north and south of the capital, and drove very slowly in an attempt to slow traffic. The action was aimed at drawing attention to taxi drivers' attempt to secure a ban on mobile apps like Uber, Lyft, Curb and Sidecar, which enable people looking for a lift to connect with ordinary drivers - not taxi drivers - willing to offer a lift for a fee.

The protest was only sparsely attended, and had little impact on Parisian traffic. The low level of attendance was in part a result of the failure of a syndicate of taxi drivers' unions, FO-UNCP Taxi, to endorse the protest - even though it is lobbying hard for a complete ban on rideshare services, which taxi drivers accuse of giving them "unfair" competition.

"We don't want to bother people during the pre-Christmas season," said Nordine Dahmane, an official with FO-UNCP Taxi.

Nevertheless, the taxi drivers' wider lobbying efforts against rideshare apps appear to have succeeded. Pierre-Henry Brandet, a spokesperson for the French Ministry of the Interior, was asked Monday on a French TV station, iTélé, whether rideshare apps would be banned in the near future.

"Absolutely," Brandet said. "Not only is it illegal to offer this service, but it's a real danger for consumers."

Brandet said that as of January 1, the operators of mobile apps like UberPOP that connect non-professional drivers and riders would face punishment of up to two years in prison and a fine of 300,000 euros if convicted. Those provisions were specified under a new law that had been passed earlier this year, but that had not yet entered into force.

A commerce tribunal on Friday rejected a lawsuit aimed at banning UberPOP, a bargain rideshare service that had gained 160,000 users since it launched in France in February, according to Uber, the company operating the app.

The taxi drivers' traffic-disrupting protest Monday was in response to Friday's court judgment. The sparse participation of taxi drivers in the protest may have been partly due to the fact that the new law banning all rideshare apps for non-professional drivers was known to be already on its way.

UberPOP has already been banned in Spain and the Netherlands. It is also under legal attack in several other countries, including Denmark and Norway. India said it would ban all rideshare apps earlier this month after a client reported that she was raped by a driver.

In some jurisdictions, however, rideshare apps like Uber have been brought in from their legal no-man's-land. Salt Lake City passed a new municipal law in November that allows anyone with a clean driving record to offer rideshare services, after getting their vehicle safety-inspected at a vehicle inspection station and paying a $65 registration fee. Many other cities, particularly in North America, are likely to follow suit with similar regulatory frameworks.