Former Chancellor Schröder Sworn in at Russia′s Gazprom | Germany| News and in-depth reporting from Berlin and beyond | DW | 30.03.2006

Former German chancellor Gerhard Schröder was voted in Thursday as head of the supervisory board of a consortium that plans to build a natural gas pipeline under the Baltic Sea from Russia to Germany, officials said. 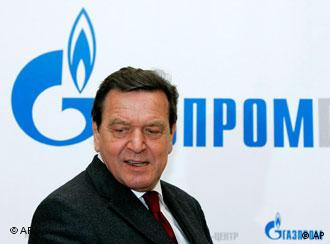 The new head of Gazprom's Supervisory Board is a familiar face

The vote was taken at the board's first meeting at Gazprom's headquarters in Moscow.

"This pipeline is not aimed against anyone but is aimed at ensuring the security of gas supplies to Europe," Schröder said.

"Not only in Germany but throughout Western Europe there is growing need for gas, while domestic production is falling," he said. "This project is in the interests of Germany. That is why it will be supported by every German government."

The 61-year old former chancellor is also an advisor to Swiss media group Ringier and international investment bank Rothschild and has made lucrative public-speaking appearances. 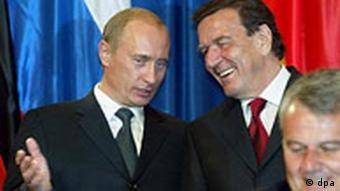 Life's a gas: The old friends are reunited in business

His acceptance of the job less than a month after he left the chancellor's office last November prompted widespread criticism in Germany. He and Russian President Vladimir Putin had worked closely on cementing German investment in the pipeline.

Earlier this month a lawyer acting for Schröder said that he had won a temporary injunction against the leader of the liberal Free Democrats, Guido Westerwelle, preventing him from linking Schröder's post as chancellor to his involvement in the pipeline.

Appointment and pipeline project under fire

The project has also prompted criticism from new EU members Lithuania and Poland, which complained that Schröder had gone over their heads on a pipeline that is likely to pass through several Baltic countries' territorial waters.

Other members of the supervisory board include Gazprom chief executive Alexei Miller as well as officials from Germany's E.ON and BASF. 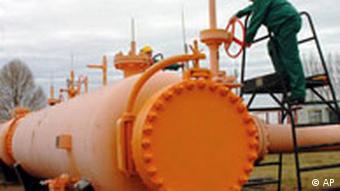 Europe hopes to keep the Russian taps turned on

Gazprom has a 51.0 percent stake in the North European Gas Pipeline, while stakes of 24.5 percent are held by E.ON and BASF.

Matthias Warnig, representative of Dresdner Bank in Russia, was named as the pipeline's managing director.

Miller on Thursday appeared to give backing to the idea of possible involvement in the project by Gaz de France. "This decision could be taken if the new partner brings something new of strategic importance," Miller said in response to a question from journalists.

Schröder looking to use German links in new role

Earlier this week Schröder paid a visit to Gazprom production facilities in the Siberian province of Yamalo-Nenets.

He also confirmed that he plans to create a "German-Russian think tank" but denied a Russian press report that the body would be a lobbying agency for promoting the Russian economy in Germany.

Work on the pipeline has already begun onshore in Russia that is planned to extend around 1,200 kilometers (750 miles) under the Baltic Sea. 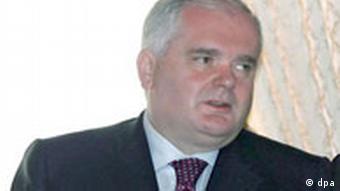 European Union officials have sought to reassure new EU members worried that they could be left without supplies if Russia no longer has to ship gas through their territory to Western Europe. The EU expects the pipeline to be used to increase supplies to Europe rather than for rerouting existing deliveries, an EU official said recently.

Former German Chancellor Schröder certainly knows how to stay in the headlines. His wildly lucrative business deals are not giving his critics a chance to even begin lowering their eyebrows. (Dec. 28, 2005)

The German parliament pondered the ethical implications associated with former Chancellor Gerhard Schröder's decision to take a top position on a Russian-German energy project so quickly after leaving office. (Dec. 15, 2005)

Former German Chancellor Gerhard Schröder has deflected criticism over his new job Tuesday as calls continue to mount for a code of conduct for government officials once they leave office. (Dec. 13, 2005)