Forever and a Day: The Scorpions Film

The Scorpions wanted to say goodbye to their fans with a world tour. This film, co-produced by DW, shows how the band turned their farewell tour into a new start and kicked off their careers yet again.

Who hasn’t ever dreamed of a life as a rock star? Touring the world with your best mates, platinum recordings, seducing girls with the electric guitar – the whole thing. Scorpions founder Rudolf Schenker made this dream come true, although he and his band worked hard for it. But at some point, everything has to end, and in 2010 the five hardrockers from Hanover announced their farewell tour.

On behalf of Deutsche Welle, a film crew spent several years following the Scorpions on their concert tour around the world. In the cinema-format documentary"Forever and a Day", the members of the band look back over its history for the first time. Viewers will see a surprising metamorphosis and learn just why the band members do not want to stop. 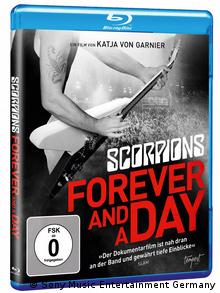 HiRes – The film in the highest quality on Blu-ray

Behind this world career are lots of energy, perseverance and, of course, ability. The Scorpions have been playing in rock’s Premier League for a long time. Their 100 million records didn’t just sell themselves. Especially in the 1970s and 1980s, the band wrote songs that both caught the mood of the times and were yet timeless – hardrock standards like “Rock You Like A Hurricane” and "Big City Nights", but also ballads like "Holiday" and "Still Loving You".

Singer Klaus Meine and guitarists Rudolf Schenker and Matthias Jabs remember great moments from the band's history. Director Katja von Garnier has brought many of their entertaining anecdotes to life with footage from the band’s own archive. The musicians talk about many of the important decisions they had to make on the way to the top.

Five decades with one voice 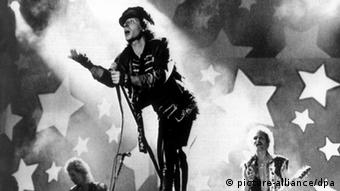 Klaus Meine at a Scorpions concert in Moscow in 1989

But, of course, there were also shadows in such a long career - for example, Klaus Meine losing his voice during the recording sessions for the "Blackout" album in 1981. For ten months, it was completely unclear whether he could ever sing again the way he used to. Ten months is a long time in the music business, so Meine offered to leave the band to let them get on with their careers. But the other members turned him down. Rudolf Schenker kept the band together and Meine came back in full song after complex vocal chord therapy.

Just a decade later, the Scorpions brought out their biggest hit: "Wind of Change" is still regarded as the soundtrack of German reunification. Klaus Meine recalls how he sensed the end of the Cold War at a peace conference in Moscow months before and turned his gut feeling into music.

The 1990s were certainly the least successful decade in the band’s biography. It wasn’t until the turn of the millennium that they got lot of new fans with their live shows – especially outside Germany. In their homeland, on the other hand, the Hanoverians were laughed at for their sound and image as macho rockers. But this has also changed: respect for their life performances is more and more common in concert reviews. 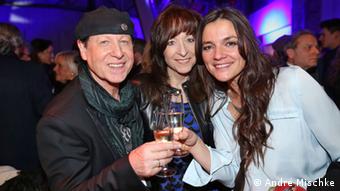 The film hasn’t been overtaken by the present either. Rather, the present fits seamlessly into the picture you get after watching 100 minutes of the Scorpions. At first, they were serious about saying goodbye, but Klaus Meine and Rudolf Schenker, by now both in their mid-60s, really notched up the pressure during their so-called “Farewell-Tour.” Fans of all ages enjoy the band and their music so much that the northern Germans can’t do anything other than keep going. And the concert and tour footage is so impressive that even the most skeptical viewer can see quite clearly: Quitting is not an option for the Scorpions.