For Dusseldorf′s carnival float-maker, nothing is holy | Culture | Arts, music and lifestyle reporting from Germany | DW | 06.03.2011

For Dusseldorf's carnival float-maker, nothing is holy

Jacques Tilly in Dusseldorf builds some of the cheekiest carnival floats in the country. His enormous, 3D caricatures poke fun at the most powerful people - and have been known to influence political decisions. 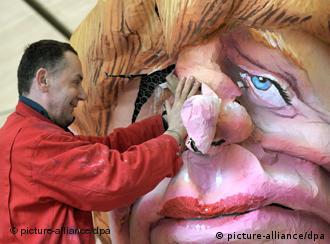 He has just pulled an all-nighter, but doesn't seem tired at all. Jacques Tilly walks through the warehouse with an impish grin on his face and takes a look at the smaller floats, which still smell of fresh paint.

A singing eggplant holding a microphone or a pink lion next to a cake - most of the motifs are relatively tame. But that is just the part of the Dusseldorf warehouse that is open to the public. 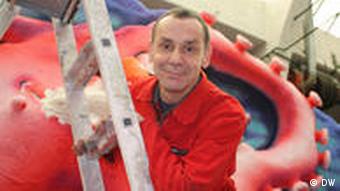 Floats are kept secret until they debut on Carnival Monday

Tilly won't reveal exactly how the plagiarism scandal surrounding Guttenberg will be presented in the big parade on Carnival Monday.

"Of course, it's safe to assume that a few of the hot political candidates at the moment will probably make an appearance in the parade," admitted the 47-year-old float maker. "It would be a disgrace if we didn't make a float about Guttenberg!"

Tilly and his team are committed to keeping the floats in Monday's parade as up-to-date as possible. He owes it to the revelers to make sure "no cold coffee is rolling down Dusseldorf's streets," as he put it.

Even if big news breaks on Sunday night, Tilly says he'll work through the night caricaturize it in larger-than-life plastic form by Monday morning.

Tilly took the Catholic Church to task in 2009

Tilly made his first float back in 1983. He took on the side job to pay for his Communication Design studies in Essen. In those days, the float designs were revealed to the press ahead of Carnival Monday. Sometimes he was forced to alter particularly provocative designs - like one that depicted then Chancellor Helmut Kohl as a naked indigenous South American.

In 2000, the Dusseldorf Carnival Committee had had enough: They ruled that the floats should stay under wraps until the parade on Carnival Monday. Jacques Tilly sometimes receives nasty mail after the parades from those offended by the irreverence of his floats.

He's often been threatened with lawsuits, but "the courts in Germany uphold the 'jester's' license, freedom of speech, and artistic freedom," said Tilly.

The artist's jester's license means that, for him, nothing is holy - neither politics, nor religion. He has scoffed at Islamic suicide bombers and depicted Catholic leaders as witch-hunters or anti-Semites.

The signs on the caricatures read "reality" and "cliche"

When caricatures of the Islamic Prophet Mohamed in a Danish newspaper led to violent protests throughout the Muslim world in 2006, Jacques Tilly took a clear stance. On one of the Carnival floats that year, he placed a black coffin engraved with the words "Freedom of speech."

The only boundaries Tilly respects are the ones he sets himself.

"There are things I would never do, like make fun of victims," he said.

Tilly's provocations have even been a help to some victims. Two years ago, one float portrayed Jürgen Rüttgers, then the prime minister of the German state of North Rhine-Westphalia, destroying a cello. The instrument belonged to a musician who had been an advocate for the homeless.

The scene was a conspicuous criticism of the state government's decision to cut financial aid to the homeless.

"Prime Minister Jürgen Rüttgers saw the float and on Ash Wednesday, the money was returned," said Tilly with a smile. "That was the first time that a carnival float didn't just make fun of politics, but actually helped make politics - though that's an exception."

The streets of the western German city of Cologne have begun to fill with clowns, wizards, virgins and princes as the regional carnival season nears its climax. (03.03.2011)

Carnival is one of this month's highlights, but there are plenty of others in the world of music and art, film and dance - find out what's going on in Germany's cultural scene. (01.03.2011)