Flooding rages on in parts of central Europe

There is no immediate end in sight to the worst flooding parts of central Europe have seen in years. Among the hardest hit has been the southern German city of Passau. 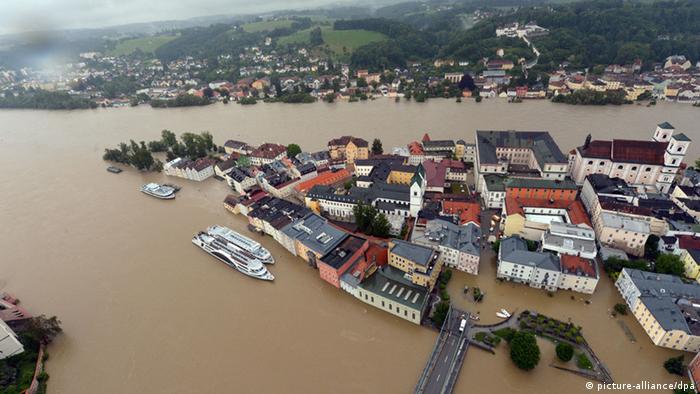 The Danube River, which is one of three that join in Passau, rose to a level of 12.8 meters (42 feet) late on Monday, leaving much of the city under water.

This is considerably higher that the worst flood in living memory, when the Danube in Passau reached 12.2 meters in 1954, and the worst the city has experienced in more than 500 years, according to Germany's DPA news agency.

The flood has left the city of 50,000 near the Austrian border without portable water and electricity. Rescue workers used boats to evacuate residents from the hardest hit areas of the town.

Germany's armed forces have been mobilized to help respond to the crisis not just in Passau, but a number of other southern and eastern cities. A Bundeswehr spokesman said a total of 1,760 soldiers had been deployed to help local authorities and volunteers reinforce flood defences. Several thousand people have been forced to leave their homes.

Chancellor Angela Merkel was expected to visit Passau and possibly the eastern town of Greiz on Tuesday. Speaking to reporters in Berlin on Monday, the chancellor pledged that the federal government would do what it could to assist those affected by the floods

Meanwhile, the government of the neighboring Czech Republic declared a state of emergency across much of the country on Monday. In Prague, the fire brigade erected flood barriers to try to protect the Old Town from the swollen Vltava River, which flows through the Czech capital. Meteorologists said the flooding in Prague and other areas of the country probably had not yet reached their peak.

Heavy rainfall has also caused heavy flooding in low-lying regions of Austria - as well as landslides on some mountains. The number of deaths attributed to the flooding rose to two on Monday after the body of a man missing since Saturday evening was recovered. There has been at least one flood-related death in Germany and six in the Czech Republic since the floods hit.

The European Commission noted that help would be available to the victims of the current flooding through the European Solidarity Fund, which it set up after the last major floods to hit the region in 2002.

"I want to assure those affected and the politicians, too, that the European family will lend support to its member states and help where it's needed the most," said Johannes Hahn, a spokesperson for EU Regional Policy Commissioner.