First pirate trial in Germany in 400 years opens in Hamburg

The trial of ten accused Somali pirates has opened in a Hamburg court, seven months after the attack on the container ship 'Taipan.' Limited background information on the pirates could hamper the case. 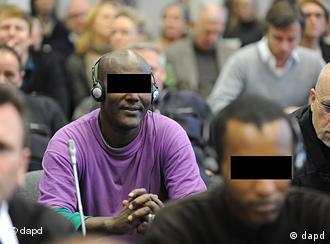 Little is known about the alleged pirates, not even their ages

The first pirate trial to take place in Germany in 400 years has opened in Hamburg.

More than seven months after the attack on the Hamburg-registered container ship MS Taipan, 10 Somali men are standing trial. They are charged with attacking the ship some 900 kilometers (560 miles) east of the Somali coast in April.

One of the defendants has told the court that he was 13 years old at the time of the attack, which would mean he could not be tried under German law. Experts in the court believe he is likely 15 or older; however, with little reliable documentation on the youngster, this could be difficult to prove.

"A child should not be obliged to stand in court, if his given age of 13 is correct," the chair of the judging panel, Bernd Steinmetz said.

The eldest accused said he was 48, while the other eight all stated ages between 16 and 28; but none of them could give his precise date of birth. The accused have been communicating via interpreters, as they don't speak German.

Possible sentences between 10 and 15 years 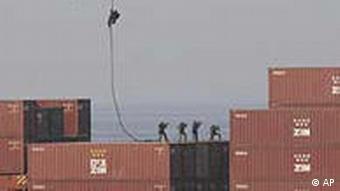 The Taipan was freed by Dutch marines

Nobody was injured when the Taipan vessel was taken hostage in April. The ship's 15-man crew fled to a safety room when the pirates boarded their ship, and the pirates were eventually captured by Dutch naval forces. The alleged pirates were extradited to Germany in June. Since then, they have been in custody awaiting trial.

The defendants could get sentences of anywhere from 10 to 15 years in prison if found guilty.

The prosecution says it has evidence that the men were in possession of Kalashnikov rifles, grenade launchers, knives and ladders for boarding ships.

The team of 20 defense lawyers jointly appealed to the court to consider the circumstances in Somalia, an all-but lawless country racked by two decades of civil war, where they said life was marked by hunger, terror and a lack of medicine.

"The Somali people are suffering; there is no possibility of fleeing within the country," the lawyers argued.

Piracy is a growing problem off the coast of Somalia, with both the number of attacks and the ransoms demanded spiking over the past two years, the London-based International Maritime Bureau told AFP news service. Some 23 vessels and 500 crew are currently held by Somali pirates, the bureau said.

As the trial of 10 alleged Somali pirates gets underway in Hamburg, many western nations are doing their utmost to help the crisis-torn nation and support the interim Somali government in rebuilding state structures. (22.11.2010)

The organization that represents a majority of German shipping interests has talked down a British proposal to set up a multi-million-euro private fleet to combat piracy off the Horn of Africa. (27.10.2010)

The hijacking of two ships over the weekend highlights the difficulties Western navies face combating piracy off the coast of Somalia. Many shipping lines are turning to private security firms for protection. (25.10.2010)

Piracy off the Horn of Africa