FIFA hit by 'tsunami' from within

Following the suspension of two of FIFA's top officials by an ethics committee, one of the accused has unleashed what he describes as a "tsunami" of revelations against soccer's governing body. 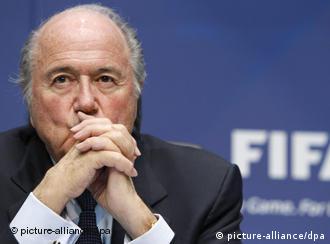 Blatter said Monday he had to deal with 'devils'

The prize for the most endearing take on the seismic scandals currently erupting at FIFA should go to Franz Beckenbauer.

German football's own World-Cup-winning "Kaiser," himself about to retire from the FIFA executive committee, told the BBC on Sunday, "I hope when June 1 comes and the election is over, then all the discussion about corruption is finished and FIFA can go back to normal."

The simplicity of the 65-year-old legend's sentiment could break your heart, but few believe that soccer's world governing body can get back to normal any time soon. In fact, most pundits would argue that returning to its apparently corrupt routine is the last thing the organization needs.

With FIFA's reputation in tatters, President Sepp Blatter was defiant in a press conference on Monday. "All the devils have entered the game," he said. "And we have to fight against these devils. And we have started to fight.

"I have not chosen the members of my executive committee. I deal with them, and I try to do the best I can," he added. "Crisis, what is a crisis? Football is not in a crisis. We are not in a crisis, only in some difficulties." 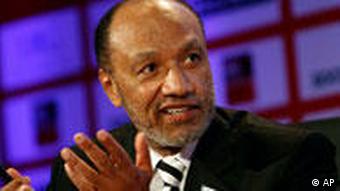 Bin Hammam was suspended Sunday, but will appeal

On Sunday, FIFA's ethics committee temporarily suspended two of its top officials, pending further investigation into alleged bribery charges. The move meant that four of FIFA's 24-man executive committee are currently serving bans or suspensions for corrupt activity, while 10 have been linked with corruption in the last few months.

Bin Hammam and Warner are charged with bribing delegates from 25 Caribbean football associations $40,000 (28,000 euros) each at a meeting in early May, in exchange for supporting Hammam's candidacy.

The ethics committee cleared Blatter of any wrongdoing in the affair, on the grounds that even though he allegedly knew of the meeting in advance, he was not obliged to report it.

Blatter is therefore free to stand unopposed in Wednesday's election, and take up what would be the 75-year-old's fourth consecutive four-year tenure as president.

Hammam, who withdrew his candidacy on Sunday morning before the ethics committee announced its verdict, is livid. He released a statement Monday, saying he would appeal against it.

"The way these proceedings have been conducted is absolutely not compliant with any principles of justice. I am punished before I am found guilty," his statement said. "I also expect the further investigation to be influenced and manipulated."

Warner, for his part, has released his own raft of counter-accusations against Blatter and FIFA Secretary General Jerome Valcke. The most incendiary is contained in an e-mail from Valcke to Warner that Warner released Monday. In the mail, Valcke says Qatar "bought" its successful World Cup bid for the 2022 tournament. Qatar denies any wrongdoing.

"'For MBH [Hammam], I never understood why he was running,'" Valcke's e-mail said. "'If really he thought he had a chance or just being an extreme way to express how much he does not like anymore JSB [Blatter]. Or he thought you can buy FIFA as they [Qatar] bought the WC.[sic]'"

Valcke explained the e-mail in a statement Monday: "What I wanted to say is that the winning bid used their financial strength to lobby for support."

Warner has also accused Blatter of giving CONCACAF, the Confederation of North, Central American and Caribbean Association Football, a $1-million gift at its annual congress in Miami on May 3. This gift has been confirmed by one president of a CONCACAF association, and Warner has suggested it was handed out in exchange for votes. In addition, Warner said Blatter gave computers to Caribbean football associations.

The fact that accusations are now flying within the organization, rather than from a few investigative journalists, strengthens a growing impression that FIFA is in a crisis that fundamentally threatens its future.

Comparisons between FIFA and the International Olympic Committee at the end of the 1990s are now being bandied about freely. In 1998, a bribery scandal surrounding Salt Lake City's bid for the Winter Olympics resulted in a general overhaul and reform of the IOC. 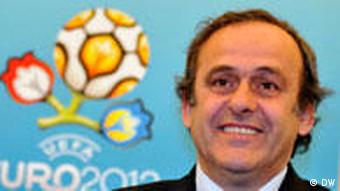 Hugh Robertson, British sports minister, recently called the FIFA situation a "farce." He is currently attempting to organize his counterparts in other governments to put pressure on the organization.

"Sports governing bodies have to be transparent and accountable and change has to happen for the good of world football," Robertson said recently. "FIFA needs to urgently reform in the way that the IOC did after Salt Lake City."

Even Michel Platini, head of football's European governing body UEFA, another member of FIFA's executive committee and a former adviser to Blatter, said it was time for football to be run by former footballers.

"I think FIFA is like the International Olympic Committee was some years ago, I think we are at the end of a system based on politics," said Platini. "I think it will finish in the next few years and we will have people from the sport. I think FIFA has to come back to football."

Blatter himself has promised reform in the past, but there is a growing sense that as long as he remains in power, FIFA's reputation will be damaged. So if Blatter, as expected, is re-elected Wednesday, Beckenbauer might get his wish after all, at least for the next four years.

FIFA struggles with corruption allegations, but scandal nothing new

Times have been better for FIFA, with accusation and counter-allegation tearing it apart ahead of a controversial presidential election that has just one candidate. However, scandals are nothing new for the organization. (31.05.2011)

Mohamed bin Hammam has withdrawn from the presidential election of football's governing body FIFA, leaving incumbent Sepp Blatter without a challenger just days before the vote. (29.05.2011)

FIFA President Sepp Blatter has been cleared by the organization's ethics committee and is set for re-election. Vice President Jack Warner and Blatter-rival Mohamed bin Hammam have been temporarily suspended. (29.05.2011)