Tens of thousands of supporters of the Fatah party have gathered in the Gaza Strip to mark the anniversary of the movement’s founding. This is the first time the party has held a rally in the territory since 2007. 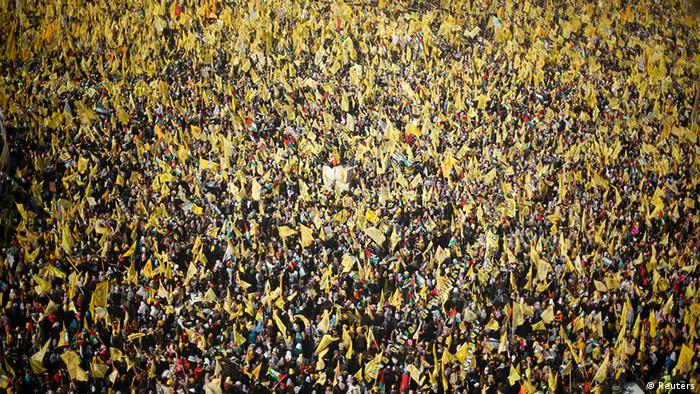 Demonstrators gathered in a square in Gaza City on Friday waved both Fatah and Palestinian flags, with some carrying portraits of the party's leader, Palestinian President Mahmoud Abbas.

Similar events were held in other towns across Gaza.

The fact that Hamas has allowed Fatah to organize the celebrations there is seen as part of efforts at reconciliation between the two sides, which have been at loggerheads since Hamas seized control of Gaza in June 2007. This came a year after Hamas won a parliamentary election.

The Islamist movement Hamas, founded 25 years ago, is enjoying a new wave of popularity in the Gaza Strip. But enthusiasm over its recent military action against Israel may soon be smothered by disillusionment. (15.12.2012)

Hamas issued a statement congratulating Fatah on its anniversary, describing it as a "celebration of national unity and a success for Hamas as well as Fatah."

"This positive atmosphere is a step on road to restoring national unity," the statement said.

President Abbas did not travel to Gaza for the ceremony, but he sent a video message from the West Bank, which was broadcast to the crowd on large television screens.

"Victory is near and we will meet you in Gaza in the near future," Abbas said. "Gaza was the first Palestinian territory rid of (Israeli) occupation and settlement and we want a lifting of the blockade so that it can be free and linked to the rest of the nation."

Friday's rally was the culmination of days of ceremonies to commemorate the first operation against Israel claimed by Fatah's armed wing, launched on January 1, 1965.

Turkey and Greece hit by severe earthquake 51m ago