Certain clothing brands associated with right-wing skinheads across Europe were originally the favored fashion labels of a non-political, multi-racial youth movement. Now these brands are reclaiming their positive image. 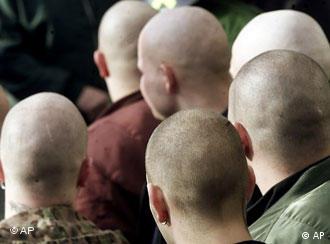 The original skins were more into fashion than fighting

Nothing makes mothers pull their offspring closer than the sight of a group of skinheads marching down the street in full regalia. Skinheads - the bogeymen of youth culture - have been a social pariah for decades. Their violent reputation and far-right connotations precede them and their uniforms label them a threat.

Or do they? While there is little doubt that skinheads have always had a reputation for disorder, to judge a shaven-headed boy or girl by the labels they wear may now be a thing of the past.

Clothing has been an important part of the skinhead culture ever since the schism in the mid-1960s mod scene in Britain split the "peacock" mods - a less violent, more affluent and fashion-conscious group who favored expensive clothes - from the "hard" mods who embraced a more working-class image and whose less privileged lives gave them a tougher edge. 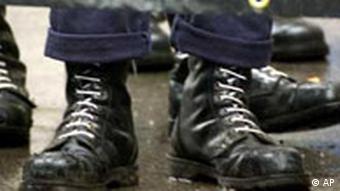 The notorious boots came from the working-class image

By the end of the decade, these "hard" mods were known as skinheads and their lives and fashion had strayed further away from the middle-class fascination with the latest trends, settling for an image made up of practical styles that suited their employment - steel-toed boots, straight-legged denim jeans, shirts and suspenders.

"When the skins segued from the ["peacock"] mods, they adopted a more robust image," said Bill Osgerby, professor of media, culture and communications at London's Metropolitan University. "They were well polished, stylish and street sharp. Some of the brands they wore were actually quite up-market, like the Cromby overcoat which was favored by city gents."

Osgerby said that these skins were, in essence, robustly masculine mods which stayed loyal to the fashion fusion of black - mostly Jamaican - youth styles and a British working class image. This meant that by the late 60s, skins were clad in a uniform of long- or short-sleeve button-up shirts or polo shirts by brands such as Ben Sherman, Fred Perry and Brutus, straight-legged Levi's jeans and heavy boots.

Far-right harnesses the power of the image

When the punk movement and the death of 1960s idealism brought anarchy and social despair in the mid-70s, far-right groups saw the potential in the proclivity for violence and fierce patriotism that some punk skins were beginning to embrace. Far-right groups across Europe began recruiting white skins with right-wing views and promoting the skinhead image among their own youthful members.

While adopting even shorter haircuts, tighter jeans, combat trousers and knee-high boots, these Nazi skinheads also kept their Brutus and Ben Sherman shirts, their Lonsdale sweaters and Fred Perry cardigans. As a result, skinheads and skinhead fashion became synonymous with the neo-Nazis.

"This was not the classic skin image but it was the one which became equated with the movement and with the far-right, racist elements involved in it," said Bill Osgerby.

While there have always been aggressive overtones to the movement, violence for the original skinheads was never the consuming passion and, contrary to popular belief, they were not grouped together around a flag of nationalism and united by a racial hatred of minorities either.

In fact, coming from the working classes, they mixed with immigrants from all over the world in their manual jobs, their tight-knit communities and in their dancehall leisure time where they danced alongside their Jamaican co-workers. These traditional skinheads, also known as trads or Trojan skins, gathered around the nucleus of Afro-Caribbean music, not a banner of extremism.

However, these skinheads found that since their image, style and brands had been perverted by the right-wing skins and claimed by the neo-Nazis, they were now being tarred with the same brush. 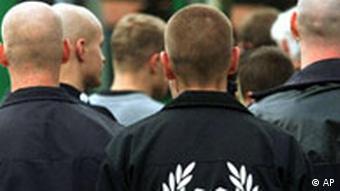 Fueled by sensationalist television, all skinheads were stereotyped as mindless, violent, and racist, with little attempt made to discriminate one subgroup from another. In the eyes of the media and the public, every skinhead was a racist, everyone who wore a Fred Perry shirt was a fascist, and everyone who wore Doc Martens boots was a Nazi.

"Of course some of the brands adopted by far-right skins come from the pre-political origins of the subculture, labels like Fred Perry and Lonsdale for instance," said Bernd Richter, a German expert on far-right movements and their symbolism. "These have been politicized, however, purely by being worn by these groups."

As time moved on, however, far-right skins in Europe, especially in Germany, moved away from these established brands. German neo-Nazis, in particular, abandoned certain traditional skinhead labels in favor of other brands associated with the far-right, such as Pitbull and Thor Steiner, and clothing which made their affiliation less public while transmitting coded political statements.

In Germany, government clampdowns on far-right symbolism have contributed to a change in the neo-Nazi uniform while the traditional skinhead brands have done much themselves to alienate the undesirable section of their consumer base.

Brands go back to their roots

Richter said that some brands sullied by far-right association have implemented concerted strategies to change their image. Fred Perry, for example, has used popular public figures like British musician Paul Weller to promote their clothing to indie and rock audiences; until recently, tennis player Andy Murray was the face of their sports line.

"They've also used ethnic models to promote equality in their ads, harking back to the origins of the skinheads when it was a multi-racial scene," added Richter.

The labels themselves have noticed a positive change in the way the public and media perceive them in recent years, although it took more than dressing palatable rock stars in their clothes to make a difference in some cases. 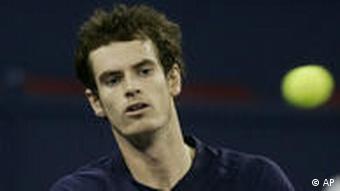 "In the last five years we've seen a real decrease in the association with the right-wing skins across Europe," said a source close to Fred Perry and Ben Sherman in Europe, asking for anonymity due to the sensitive nature of the topic. "The brands tackled the right-wing problem in a number of subtle ways; they stopped stocking shops who were selling to this area of the market, they removed some articles from their collections which were popular with the far-right and stopped selling the cheaper clothes, making the brands a little bit more expensive. Both brands are now on another level and are seen as designer labels."

The brands also began a policy of spreading a positive message to the next generation through grass roots interaction and support. Brands such as Fred Perry have used positive role models in sport and music, and have reached out to younger audiences by sponsoring sports events, like table tennis tournaments in inner-city youth clubs.

And what of the skins themselves? "The traditional skins, especially the older generation, have done much to move away from this racist image by forming action groups and promoting the Jamaican roots, style and music of the original movement," Bill Osgerby concludes. "As the original trads regularly used to say: You can't have roots in black music and be into white power."

The German supreme court made it easier to prosecute alleged neo-Nazi groups Thursday, after overturning a decision made by the state court in Dresden. The ruling clarifies the definition of a criminal organization. (03.12.2009)

Police raided apartments and offices throughout Germany in the biggest-ever action aimed at stamping out the radical-right music scene. The historic operation was two years in the making. (04.03.2009)