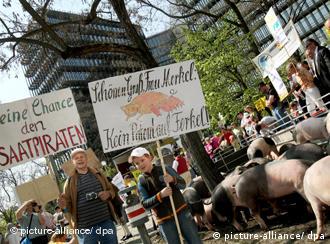 Farmers worry that their pigs could become other people's intellectual property

In a rare show of solidarity, German farmers and environmentalists staged a protest to block a genetic patent application from getting the green light. The patent would protect the breeding of pigs that possess a naturally occurring gene linked to rapid growth.

Some 400 protesters parked tractors and herded pigs outside the European Patent Office in the German city of Munich on Wednesday. They also filed an appeal seeking to overturn a 2005 patent application (Patent EP 1651777) filed by US biotech giant Monsanto, and now owned by Newsham Choice Genetics.

The patent aims to protect a pig breeding process based on genetic analysis. But critics warn that the patent could be extended to cover the animals' genes themselves, and farmers fear that they could one day be forced to pay royalties for their traditional livestock. 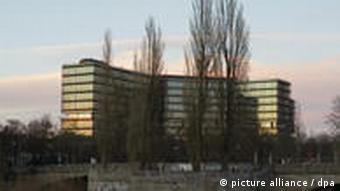 The German states of Bavaria and Hesse also oppose the patent application and have already signaled their intention to introduce a general ban on all patents covering animals and plants.

The head of the German Farming Association, Gerd Sonnleitner, told the Passauer Neue Presse newspaper that the patent was a "threat to free breeding."

"Patents on animals and plants should be generally banned, because it contradicts every basic understanding of farming, that individuals should have monopoly rights on genetic material," Sonnleitner said.

"Corporations are always trying to bypass the regulations to achieve access to animals and plants. For this reason all legal loopholes should be closed at the EU level so large companies do not dictate what is bred and what lands up on consumers' plates," he added.

The farmers' association president also called for more research into so-called green biotechnologies to investigate the risks and opportunities involved.